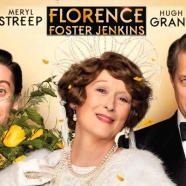 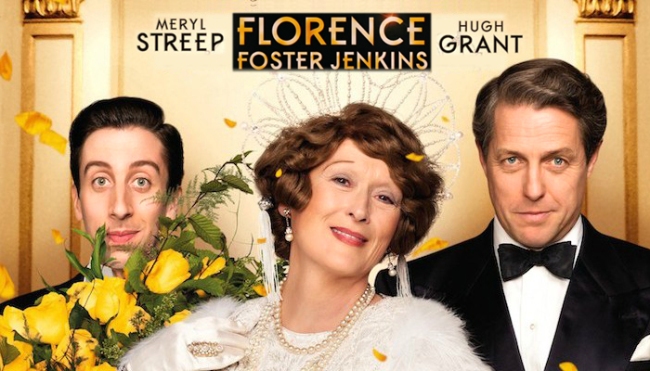 Genre labels shape your expectations of a movie but they are also manipulated by promoters to influence audience response. Both Marguerite (2016) and Florence Foster Jenkins (2016) are being sold as “hilarious comedies” whereas in reality they both tell a sad story of self-deception and mental frailty, albeit in funny ways. Marguerite is a comedy of manners, while Florence is a tragi-comedy, the genre that shows the sad truth behind the apparently ridiculous. Both films are bio-pics, with one satirising vanity the other telling a tragic tale about a mental illness that is displayed on an operatically grand scale.

Unlike the fictitious Marguerite who is ‘loosely based’ on the real person, Florence is closely based on the wealthy and generous arts socialite Florence Foster Jenkins who came to public notoriety when she hired Carnegie Hall for her operatic recitals in 1944. Both films (and still available YouTube recordings) show the full force of how badly the real Florence sang, but that’s where the similarity ends. Early in the film we learn that Florence (Meryl Streep) has defied medical science by living well beyond the usual lifespan of a syphilis victim, a disease she contracted on marrying when 18 years old. She endured decades of archaic mercury and arsenic medication with progressive loss of mental functions and chronic exhaustion. Her second marriage remained celibate by mutual agreement and her husband (Hugh Grant) was free to have affairs but was devotedly protective of Florence. The cinematic impact of these facts change the film from a satire to a study of pathos and tragedy as Florence is seriously unwell and singing is the only thing keeping her alive.

While Marguerite amplifies the ridiculous as seen from the other side of the Atlantic, Florence is an American-owned story and any ridicule is tempered with compassion. The combined acting virtuosity of icons Streep and Grant will most likely earn the film Academy nominations as these timeless stars are superb in their parts and their chemistry together is wonderful. Top production values are evident in the period set and costumes, and the whole film has an elegant authenticity that underscores the seriousness of mental degeneration, whether its on the stage of Carnegie Hall or elsewhere. Audiences might leave cinemas still chuckling at the singing of Marguerite and Florence, but more will leave the Florence film with sympathy for her desperate desire to be something that nature made impossible.