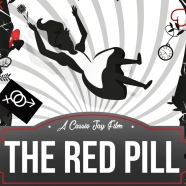 Throughout film history the documentary stands as a trusted format for documenting the truth. But there are many documentaries that are propaganda films in disguise and The Red Pill (2016) is one of them. Rather than present a balanced perspective on the gender politics behind the Men’s Rights Activists movement (MRA) the film is a vehicle for promoting MRA views.

The Red Pill is the work of American documentarian Cassie Jaye who presents her personal journey from feminist to supporter of the MRA movement. She explains that while looking for inspiration for her next film she stumbled across reports of the ‘rape-culture’ associated with the MRA. Unable to find funding because of the MRA’s right wing connections, the film was eventually crowdfunded despite protests around the world and cancelled screenings in Australia.

The resulting film is mostly talking-heads explaining MRA’s ideology and grievances. It is interspersed with clips where Jaye tearfully monologues her emerging sympathy for the MRA and their claims of systemic discrimination against males. The main examples offered is that 99% of military casualties are male with similar statistical disparities for industrial accidents. Conversely, the number of domestic abuse shelters for men are negligible. The proportion of adverse judicial findings against men in cases involving child custody, domestic violence, and rape are also cited as evidence of male oppression.

If the aim of The Red Pill was to record Jaye’s transition to MRA supporter then it is a success. But if it is to examine the MRA movement in contemporary gender discourse it has limited value. There are glaringly obvious editing biases that even a novice filmmaker could have avoided. For example, there is a complete imbalance between the amount of air-time given to reasonable-sounding MRA voices with sympathetic eye-contact compared to the selective clips of ranting feminists screaming profanities.

The bulk of this repetitive two-hour film is an MRA grievance platform with virtually no countervailing viewpoints or contextual perspective. There is complete silence on the male-dominated historical forces behind MRA statistics. For example, it does not ask why war is a male-driven industry in which old men send young men to battle, nor does it ask why men continue to abuse women and drive them into domestic violence shelters. It is also silent on the many inflammatory public comments made by MRA spokesmen that demean women and condemn feminism. Ironically, the opening scene citing rape-culture is never revisited.

Through its selective inclusion of MRA grievances and its total silence on the systemic analysis of their root causes, this film commits denialism by omission. It’s sympathetic coverage of right-wing masculinist propaganda together with the director’s tearful journey towards MRA fandom is a manipulative use of the documentary format. However, obstructing or banning this film gives it undeserved attention. Most who see it will recognise its ideological bias and myopic conclusions. By renouncing feminism and becoming an MRA spokeswoman, Cassie Jaye is a living example of the persuasive power of the new right-wing masculinist propaganda.