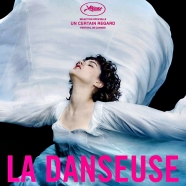 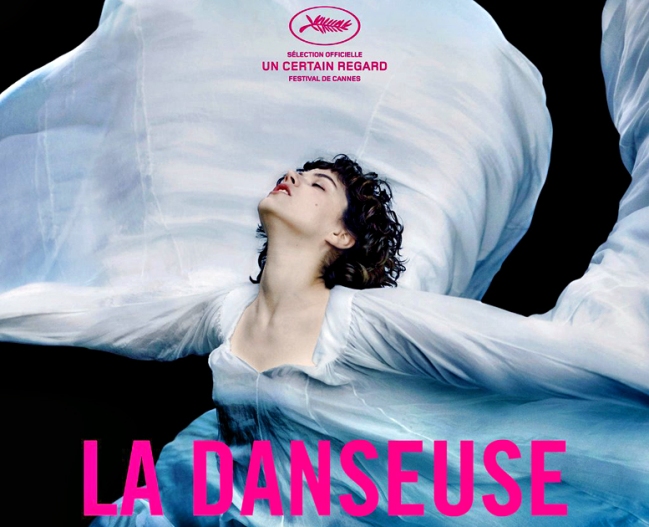 Historians have a way of sterilising cinema.  So many words are wasted on whether a film is accurate instead of understanding and enjoying film as an artform. The Dancer (2016) is a bio-pic based on the life of Loíe Fuller who pioneered a hybrid dance performance that integrated visual spectacle and physical movement. Historians can fuss over facts, but others will enjoy what is an aesthetically intense story of creative innovation in late 19th Century Paris.

The story opens with Loíe (Soko) raised by her drunken father on a farm in America. A keen reader with a vivid imagination, she dreams of a career as an actress. After her father dies, she uses money stolen from a would-be seducer to cross the Atlantic in search of fame. She stumbles upon a Parisian theatre looking for a performer to fill the stage during interval. As a talented artist with an eye for design, she conceives of a dance act that disguises her modest dancing talent and creates a dramatic serpentine performance using a costume of batons and swirling bedsheets. Her act is immediately popular. Although physically arduous, the performance evolves to using silk, coloured lights, and dramatic music, and suddenly Loíe is the toast of Paris. When the talented teenage dancer Isadora Duncan (Lilly_Rose Depp) joins the troupe, the stress of dancing on Loíe’s body, her penchant to overspend, and her emerging sexual ambivalence, all begin to take their toll.

This is a luscious film to watch. Its rich colour palette, top-shelf production values and unconventional characterisations create the dramatic energy which drives the narrative. Undoubtedly, it is Soko’s physicality and her acting style that makes this film work. She has an almost androgynous beauty that the camera exploits; in some scenes she appears dashingly handsome, in others, sublimely feminine. With an emotive range that switches effortlessly from ingénue to sophisticate, she transfixes with her gender-free expressiveness, even under the on-screen competitive pressure of the beautiful young Isadora. The serpentine dance performances are mesmerising. They hang in a space somewhere between classical ballet, modern jazz, and a gyrating living sculpture draped in wings of silk accompanied by Vivaldi under spotlights. It’s easy to understand their immense popularity as a dramatic innovation in stage performance. Above all else, The Dancer captures this spirit of excitement.

Reading this film as history gets in the way of enjoying it as visual spectacle and engaging narrative. Loíe Fuller was praised by luminaries of her time, such as Yeats, Toulouse-Lautrec, and Rodin, but largely forgotten in her native country. The Dancer is a tribute to an avant-garde artiste whose legacy lives on in theatrical dance effects that have become an artform in their own right.