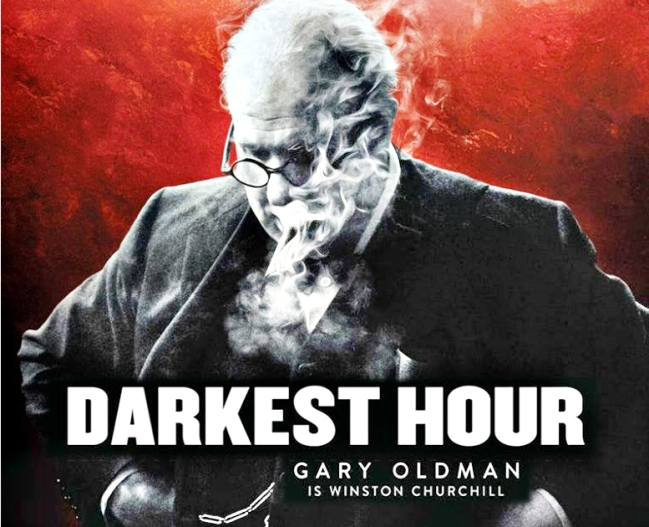 In the wake of several high-profile films about Britain’s greatest leader, is there anything more to know about Winston Churchill? The archives of history attest to the unique stature of this political figure: more remarkable is the surrounding folklore that has shaped British and world history. It is at this level that Darkest Hour (2017) is perhaps the finest film ever made about the Churchill legend.

The dialogue-dense plotline is tightly compressed yet massive in the scale of its largely unseen off-screen action. Set In the critical weeks of May to June 1940, Winston Churchill (Gary Oldman) emerges as the least objectionable candidate to become Prime Minister after the British Parliament loses confidence in Neville Chamberlain. As the film Dunkirk (2017) so graphically shows, the Nazis had cornered almost the entire British army at Dunkirk and their total destruction was imminent. It was the definitive turning point of World War II: Churchill must inform Parliament that if the British forces are wiped out in France, it may not be long before a swastika will fly from Buckingham Palace. Belgium, France and Holland are entering surrender negotiations and a political group still loyal to Chamberlain are urging that Britain use Mussolini as an intermediary to secure favourable terms for a British surrender. Churchill must weigh the saving of countless young lives if Britain surrenders against the loss of nationhood and life under Nazi rule. As history records, Churchill rejects appeasement and his speeches to the British nation declaring that “we shall never surrender” are still regarded as among the finest ever made.

It needs to be said that Darkest Hour does not add to, nor subtract from, what we know of these historical events: it’s power lies entirely in Gary Oldman’s tour-de-force performance. More psychological thriller than bio-pic, the plotline advances with electrifying gravity, painfully pausing to amplify the enormity of impending national doom. Oldman executes a brilliant screenplay with eloquence, belligerence, and a gifted gravel-voiced orator’s ‘call-to-arms’ like the world has never seen. As we saw in Churchill (2017), this is a profoundly mortal, flawed, and emotionally vulnerable leader: Oldman is simply brilliant in portraying the knife-edge balancing of two fateful options, both of which would shape the course of modern history like no other single event: surrender or risk annihilation. When President Roosevelt declined his personal call for assistance, it was indeed Britain’s darkest hour.

This film comes close to being flawless but for one scene that lingers with an air of compromised plausibility. With a Parliamentary speech about to be given, Churchill bolts from a rear car seat and into the London Tube. He enters a carriage full of ordinary citizens and soon has an audience of astonished gazes which become a single chorus urging Churchill to never surrender. Despite the rousing sentiment, the scene plays like a dream sequence from another movie. Perhaps this is trivial in light of what this excellent film achieves: a portrait of a leader who had the weight of the world on his shoulders and the courage to be guided by his uncompromising belief in the British people. As today’s British and American leaders offer more walls and less leadership, Darkest Hour is a reminder of what leadership actually means.