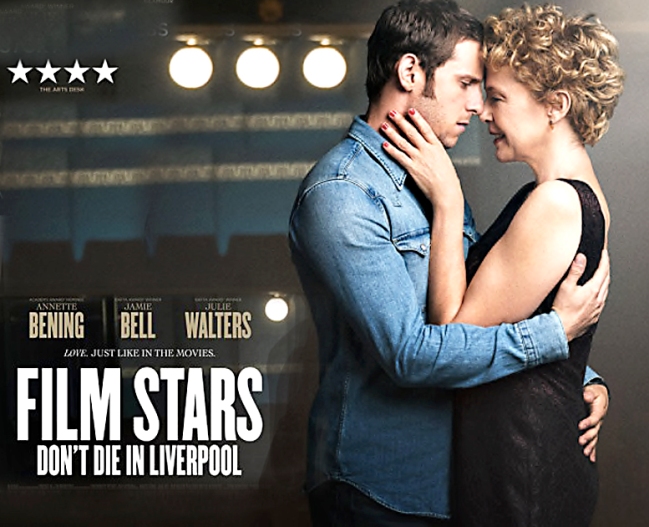 Love stories have always framed the narrative of humanity and our hunger for more is never sated. That’s why we are fascinated by variations such as gender and age inversions which challenge conventional romantic expectations. They also frame the dramatic bio-pic Film Stars Don’t Die in Liverpool (2017), a love story of an ageing femme fatale with a film title that evokes the vanity of stardom.

Based on the real-life romance between Gloria Grahame (Annette Bening) and Peter Turner (Jamie Bell), the story unfolds through a series of artfully constructed flashbacks over a decade. We meet them in a 1970s London boarding house, when Turner was at the start of a hopeful career in acting and the 1947 Oscar winning Grahame was barely surviving in theatre and television. The over-awed young actor immediately succumbs to Grahame’s star aura and they become lovers. Turner’s working-class Liverpool family are astonished when the revered Hollywood star visits their modest home and their shock at the age difference soon dissipates. When Grahame is diagnosed with a terminal illness, the family provides emotional support until her American family intervene.

While this dialogue-rich character study is not for everyone, Annette Bening’s tour-de-force performance is extraordinary for its portrayal of the darkest and lightest side of the same person. Two details mentioned early linger throughout the film to complicate our view of this relationship between an older woman and someone young enough to be her son. We learn that Grahame once had an affair with a 13-year old stepson whom she later married, and both Grahame and Turner confide to having had gay relationships. Through the prism of today’s sexual codes, the film could easily be judgemental but is not.

Moral and emotional ambiguity casts a soft light over Grahame. It is impossible to tell when she is emoting genuinely or when she is in character, acting the hopeless romantic or ageing cougar. It is only when her health declines and she must confront mortality that we can sense the human being behind the mask. It takes a special actress to hold together this kaleidoscope of emotions and Bening does it brilliantly. Jamie Bell excels as her leading man, beguiled by the charms of an older woman.

There is a self-reflexive side to depicting an icon of classic Hollywood who plays a fading star in the modern era. Bening channels several greats like Katherine Hepburn and even Humphrey Bogart to produce a brooding, mercurial woman struggling to accept that she was “once the great Gloria Grahame”. In this way, the story dwells on the backstage world where the distance between actors and their roles can become blurred and chaotic. The result is an engrossing study of the demons that lay in waiting, somewhere in the space beyond stardom.