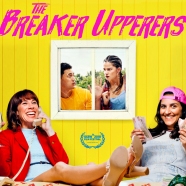 We have a long way to go before the ‘Most Unfunny Comedy’ of the year can be awarded but The Breaker Upperers (2018) will be a contender. It has been a long while since this reviewer found a film with no redeeming features and it is my duty to explain.

The story’s central premise is simple and would have had high comedic potential, had it been done well. Two hapless and loveless women set up as professional agents who break up unsatisfactory relationships for clients unable to do so themselves. The senior partner Jen (Jackie van Beek) is the organiser and Mel (Madeleine Sami) is a 30-something scatterbrain. They have a flexible repertoire of scams to accommodate all types of scenarios, and their clients have in common a spineless reluctance to take responsibility for ending a relationship. Corny scenarios like staged kidnappings or a doorstep chorus of “Cherie don’t want to be with you no more, I’m sorry Jeff its over” are meant to be terminal. After witnessing several such clumsy terminations, the film’s novelty value quickly wears off.

To keep the narrative alive there are twin subplots of a needy female client becoming dependent on Jan and Mel’s sexual tryst with an inchoate 17-year old male client. A recurring sketch of the duo impersonating police officers then being mistaken for female strippers is one of the film’s many low points. In a scene that epitomises the film, Mel’s young boyfriend is on the back seat of a car with his mother and the now-pregnant Mel in the front when he blurts out “I just realised I’ve been inside both you women’s vaginas”. Even in the Trump era, this is not OK.

In terms of acting performances, both Jan and Mel excel as rough-around-the edge characters who attract neither audience empathy or emotional engagement. The entire cast mangles the Kiwi accent in the forlorn hope that this adds humour. With a storyline that progressively thins out, we are left with puerile gags and weak dialogue that struggles to sustain the film for 90 minutes.

Intelligent humour pushes boundaries in ways that can make us look at ourselves with new insight. New Zealand comedy often attracts adjectives like brave, quirky and transgressive, terms that do not apply this time. Perhaps it’s a culturally-specific thing, but The Breaker Upperers does not translate easily from local Kiwi cinema to mature global markets.