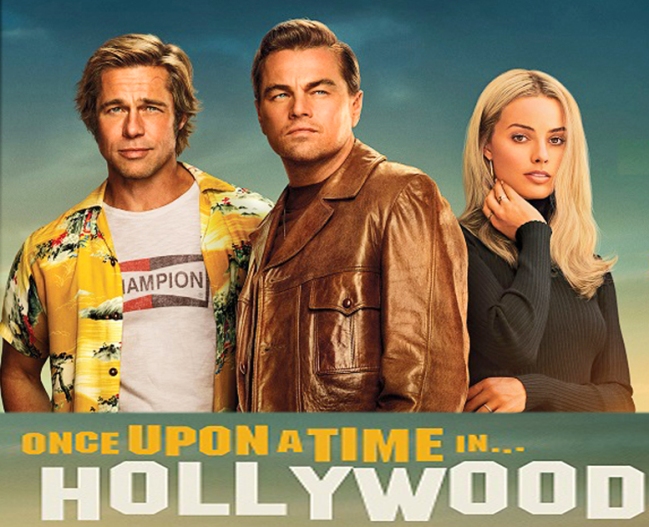 In a year of generally mediocre films it is not difficult to stand out, especially if your name is Quentin Tarantino. Whether the critical acclaim heaped on Once Upon a Time in Hollywood (2019) is warranted depends on whether you enjoy films without a narrative core that ooze melodramatic nostalgia and blur the ambiguity of watching movies about making movies.

The plotline unfolds in slow motion and when it finally does, it is largely inconsequential. The story is based around the declining career of a 1950s B-grade Western actor called Rick Dalton (Leonardo DiCaprio) whose last chance is to capitalise on the popularity of ‘spaghetti westerns’. His alter ego and long-time double Cliff Booth (Brad Pitt) is the real thing: a war veteran and martial arts expert whose role in life is to make Rick believe in himself, despite the truth. Within this loose cinematic frame, the film meanders from skit to skit without the connective tissue that makes for purposeful or coherent storytelling. It builds a two and a half hour filmic scaffold that culminates in ten gruesome minutes loosely based on the Charles Manson-inspired murder of Sharon Tate (Margot Robbie).

The only lingering after-effect of seeing this film is to question why it was made at all. Neither of the buddy stars are likeable people: Rick is self-serving, weak and shallow, and Cliff doubles up on these qualities and adds a taste for violence. Their acting is understandably old-school and contrived. Sharon is paraded as the film’s visual centrepiece, a role she fills remarkably well despite being given a script that renders her practically dumb. The relationship between the buddies, the Manson cult, and the murders is non-existent other than to imply that nothing needs to make sense if it is linked to Hollywood.

The sole redeeming feature of this film is its forensic attention to reproducing the sets, fashion, styles, and social mores of the 1960s. The archival television and movie footage recreate the ambience and ambivalence of the cultural upheaval that we now refer to as the ‘golden era’ or ‘heyday’ of film and television. While this will appeal to many, others will be distracted by the film’s fractured storyline and its contrived vignettes of the past.

Blending history, fantasy, and entertainment is Tarantino’s ultimate purpose. His message is simple: the fairy tale of Hollywood is and has always been a chimera.