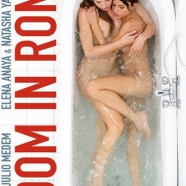 This is a film with a beautifully simple narrative that focuses on one night and one space. An experienced lesbian seduces a novice…they spend a night in a room in Rome where their naked physicality merges with Renaissance art in a small world that is transformed through loving a total stranger….all the makings of another homo-erotic love tale with high-brow artistic flourishes and a haunting musical score to carry the story to the high watermark. While its narrative is similar to Carol (2015), it is very un-restrained in its portrayal of raw sexual passion.

But there is more to this film and it genuinely cuts new ground. It is full of surprises, twists, and exquisitely painful turns, and the lovers must reconcile the fantasy world they have created with the outside world that awaits. The acting is playful, vibrant, and the interactions erotically natural, giving the film a power not found in the genre factories.

This is a bitter-sweet love story that goes beyond gender boundaries and is a film that lingers on and on. Like so many films that are produced outside of the Hollywood genre factories, its a gem of a film that deserves more critical acclaim.