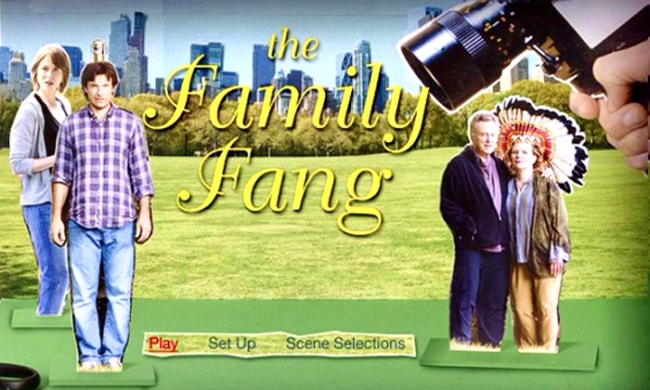 Bad-parent movies are a popular comedy genre that laughs at parents for not being perfect.  The drama, thriller or horror versions are more about exploring the dark side of family life and the damage that adults inflict on their young. The offbeat satire The Family Fang (2015) has its funny moments but this is not a comedy. It is a portrait of psychological abuse conducted by parents in the name of art with sinister undercurrents always beneath the surface.

Internationally renowned Caleb Fang (Christopher Walken) and his wife Camille (Maryanne Plunkett) are performance artists dedicated to disrupting the conventions of normality. They stage impromptu happenings in public places simply to witness the sublime beauty of the chaos. Their children Annie (Nicole Kidman) and Baxter (Jason Bateman) have been used as performance props since they were born and their adult lives bear the scars of parenting based on artifice and deception. As youngsters they busked a song “kill all parents so you can keep living” just to get crowd reactions, but they could not foresee the truth in the lyrics nor how their parents would control their lives into adulthood.

The story unfolds backwards with Annie and Baxter at their parent’s empty home searching for clues to explain the sudden and violent of disappearance of Caleb and Camille. Police believe the worst but the siblings believe it is just another stunt. While trawling through videos and other memorabilia, they see their lives paraded before them. They realise that they have always been exploited and are victims of unresolved psychological abuse. Through flashbacks, they can see Caleb as a violent personality and Camille as meekly compliant while family gatherings were tension-filled events under Caleb’s domination.  When the siblings question the value of the performances the reaction is pure menace.

This is a dysfunctional family in both obvious and implied ways, and the film keeps us guessing whether the knotted ball can ever be untangled. The four characters are well defined with strong and believable performances, and the conflicts between young and old are frighteningly recognisable as the kind of things that happen in both normal and transgressive families. When Caleb says “parents damage kids, so what” it sends a shiver down your spine to realise that some people are not psychologically equipped to be parents. Annie and Baxter must confront the fact that letting their parents go may the only way to grow up. This is an original take on an age-old story that is also provocative and engaging.