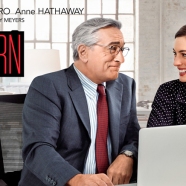 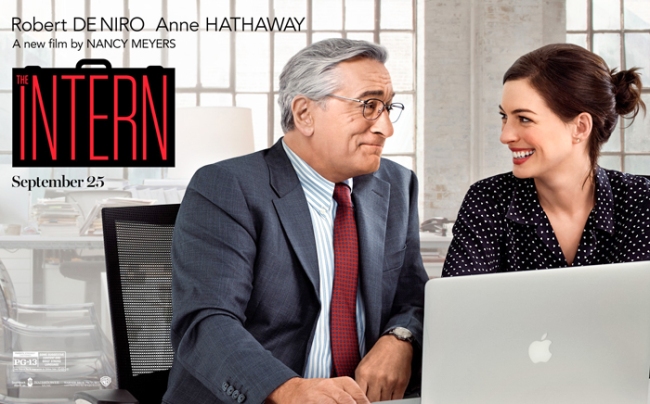 Surely they are not still making films like this. Do today’s audiences really want pre-feminist stories about wise old men that step in to prop up gorgeous and successful young career women whose feminine foibles are not only career-limiting but funny too? Casting the wonderful Anne Hathaway alongside the venerable Robert De Niro is the only way a director can get away with such a vacuous and demeaning narrative, and annoyingly produce such a thoroughly enjoyable film.

This charming tale rests on an age and gender inversion where a bored 70 year-old former top-rung executive applies for an internship in a fast-growing online fashion company, a narrative with playful echoes of The Devil Wears Prada (2006). De Niro gets the gig, but only because of company policy against age discrimination; when he is assigned to assist CEO Hathaway some beautiful chemistry emerges that crosses age boundaries.

There are many charming, funny, and touching moments as the unflappable “senior intern” settles into the chaotic youth-driven business space. If you are not amused by such ageist insights, much of the movie will be lost on you. The creatively brilliant CEO who admits to “not being good with old people” is disorganised and at risk of losing everything unless she acquires some strategic skills, which of course women don’t have and men are loaded with.

The old versus new culture clash is one long cliché expressed through baby-boomer work-ethic mini sermons offering fixes for the hipster’s free-for-all work-styles. Its all mixed together with his cute efforts to learn Facebook, her adorably feminine bouts of self-doubt, her stay-at-home husband doing wife work, and other random themes that don’t cohere sufficiently to elevate the film’s achievements. But most De Niro and Hathaway fans are unlikely to be bothered by the clichés of this “behind every successful woman is a wise man” fable and find it an entertainingly likable film.