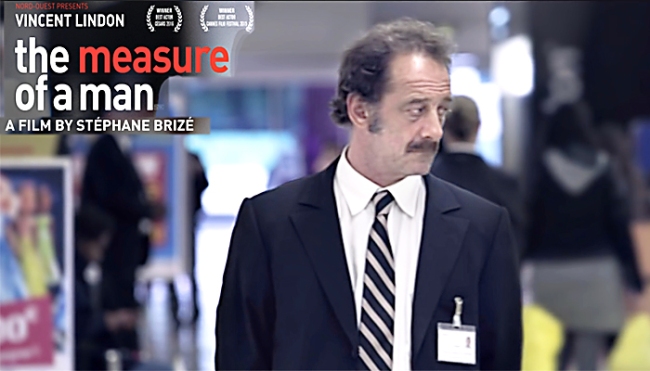 The docu-drama is the genre that brings you up close and personal to real life. Its hyper-realism can make you feel like a witness to a real-time situation, often with jittery hand-held cameras, minimalist acting and cluttered sets that recreate the existential ordinariness of everyday living. We find all of this in The Measure of a Man (2016), an outstanding docu-drama that is excruciatingly realistic. It is also a grindingly slow story that compels us to witness the everyday indignities endured by ordinary people who struggle through harsh economic times.

Set in France, the story is told through the eyes of middle-aged and life-weary Thierry (Vincent Lindon) who lost his machinist job a year ago when his factory closed. The plotline is based on a series of vignettes where Thierry endures the indignities of a principled man who must work in an unprincipled world. Plot and technique converge as we are drawn into Thierry’s world to feel his suppressed anger and to see how far he can be pushed. The employment agency forces him to undergo training that proves useless; he must participate in self-improvement seminars and endure the sneering insults of less experienced people; and the condescending remarks by bank staff and job interviewers belittle him without offering hope. With a wife and special-needs son to support he must consider selling cherished assets, but then lands a job as a megastore security guard and things look brighter. The store wants to increase profits and lay off older workers so he must police petty pilfering by shoppers and staff. One by one, he sees human misery being multiplied by actions he is forced to take. Without saying a word, we feel his disgust and his moral entrapment.

This is an unusual film and one that many audiences will find difficult to watch. While all films try to reach us emotionally, this one deliberately makes the viewer feel uncomfortable and even agitated to the point where some may want to leave. The shaky camera often adopts a fixed viewpoint and stays there for what feels like a squirm-in-your-seat eternity. We are there alongside Thierry while he interrogates a youth, a pensioner and several staff, and are silent witnesses to their palpable fear. The film title speaks of the measure of a man, but this compelling film dramatically demonstrates that the measure of modern society is how it treats the dispossessed and disadvantaged.