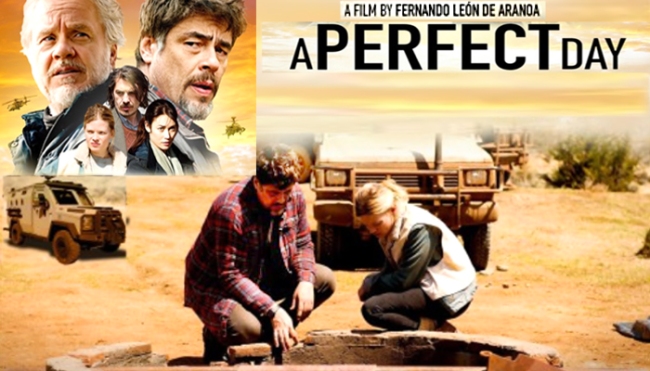 It is ironic that war is the biggest industry on the planet. Its wider industrial domain includes warrior politicians, arms manufacturers and military forces. Less acknowledged are those who perpetually seek amelioration of its consequences like the United Nations and various humanitarian aid agencies. Most of these groups regularly star in movies but aid workers get little cinematic glory. It is in this wider context that the Spanish-directed film A Perfect Day (2015) is an unusual and original addition to black comedy war dramas, least of all because the way it avoids typical war movie scenarios and narratives. It covers ‘one perfect day’ during the military wind-down in the Balkans crisis of mid 1990s and is a refreshing, entertaining and informative insight into the role of aid workers when the big guns go quiet.

The story begins and ends with the image of a big fat corpse in a well, dumped deliberately to pollute village water. In between we see frantic efforts by a small group of aid workers to find scarce rope that can haul him out, and rope becomes a metaphor to join several unconnected incidents that make up the narrative. There Is no sound of bombs or signs of fighting; we only see a beautiful country full of silent monuments to the devastation of war. Bombed-out ghosts of villages, homeless children, poverty and toxic hygiene are some of an aid worker’s challenges and black humour is the universal panacea for coping. On this day, the group must deal with the risk of hidden road mines in cattle carcasses, villager distrust and military animosity towards interfering aid workers, and a United Nations bureaucracy that shows little sensitivity towards dispossessed victims of war. Oh, and they must find a soccer ball for a young boy.

As with all character-driven films, this one is less about what happens and more about what it is like to be there. The characters are built with re-purposed M.A.S.H. traits that are likeable, funny and plausible, and the acting is top-class. There are no glory hounds in the group and each has their own coping strengths and emotional foibles. The director orchestrates the characters and sub-stories with perfect tempo to produce a story that is totally engaging if not gripping. You might wonder how a group of loosely disciplined and unaccountable workers can roam freely across a war-ravaged country, or whether the final scene is actually a political statement about their true value. If so, the film has made its mark on you.