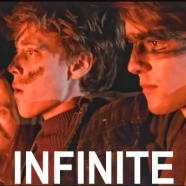 Short films are the poetry of cinema. Their story arc must unfold in a quick compressed sweep to stir emotion, entertain and make you think. Most do it on a small budget, without diversionary sub-plots, in-depth characterisation or other artifices of cinematic technique. If that’s not enough, the good ones also tell us untold things with images not yet seen. Infinite (2016) does all of this and more.

The film is book-ended with scenes of five youths dancing in the dark around a roaring fire, looking like witches communing with the spirit world instead of an expression of deep friendship between men. Sid is terminally ill and he assembles his four closest friends, asking each to find one symbolic token of his life that will be ritually burnt to create a carbonised memory in the infinite universe. The story premise is implausible until you begin to absorb its emotional power. The friends agree of course, huddled like a supportive womb, holding back tears for his sake, trying to understand what it means for a close friend to die. The dialogue is often hesitant, reflecting the confusion of young men groping in the dark for how to express an inner turmoil that matey banter cannot handle. Sid’s bright-eyed acceptance of his impending fate is disarming and some may think it is underplayed or the scripting is awkward. But these are experienced young actors and their performances reflect reality with an uncommon honesty, depth and softness which we know exists in the male species but is rarely shown on film, let alone in a short.

The camerawork is unusually sensitive, enclosed and inclusive, often in pin-sharp focus with shallow depth of field to isolate grieving souls from harsh reality. The sets have an emotionally sombre yet warm colour palette that seems apt for depicting masculine pathways to manhood, as if a colour can do that. Most rom coms, teen flicks, coming of age and melodramas deal in emotional currency but this one looks at a painful subject in a poetically beautiful way. It may be that as a father of two young men, this film hit me more than it otherwise would: but I don’t think so. It has an arresting quality that demands engagement and whatever limitations exist seem unimportant against what is achieved in this 16-minute little gem of a film.

(With thanks to LowKey Films London for pre-release access. Readers can track the film via https://www.facebook.com/LOWKEYfilmsuk/?fref=ts )