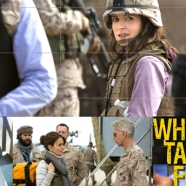 Most movies have several layers of meaning and sometimes a hidden layer will tell an unintended story. Whiskey Tango Foxtrot (2016) is described as a comedy, but it is not a laugh out loud kind of film. The iconic M.A.S.H. proved you can mix humour and war but WTF goes beyond wisecracks in a tent to make light of a superpower war that is waged against an ancient impoverished country. Based on a real war correspondent’s memoirs, this film adaptation ultimately casts a poor light on large numbers of non-combat personnel who are there for reasons that have little to do with altruism or professionalism.

At 40-ish, bored desk-bound copy writer Kim Baker (Tina Fey) is sick and tired of staring at the same carpet spot near her gym treadmill and is desperate for a change of life. She is drawn by the excitement of war reporting and ends up spending several years in Afganistan. There are several connected strands to the story, like Kim’s makeup-destroying experiences as an embedded reporter, exposing the persecution of Afgani women, and encountering a variety of characters including a love interest and some quirky Afganis who do things very differently in that part of the world. The attention of the global press has turned away from Afganistan to Iraq, and Kim and her reporter fraternity face reassignment. There are two standing gags that frame the film. The resident female stunner Tanya Vanderpoel (Margot Robie) tells Kim that girls who rate 6 in the States are a 9 or 10 in a war zone so her sex-life will be amazing. The more telling gag uses the boiling frog metaphor, where the water temperature rises so slowly that the frog does not realise it is about to die. The war zone press corps are depicted as adrenalin junkies and sex-crazed alcohol or drug addicts. The longer they stay the more humanity they lose.

This is a mixed but engaging film. It is well paced with filming that captures both excitement and danger. More importantly, it fills a gap in most people’s awareness of what it is like to be a female war correspondent. While some have panned Tina Fey as not comedic enough, this is war and she nailed her part. The comedy did not get many laughs in my cinema, just some sniggers over frat-house one liners. Although the film is not the comedy I expected, Whisky Tango Foxtrot is very entertaining.