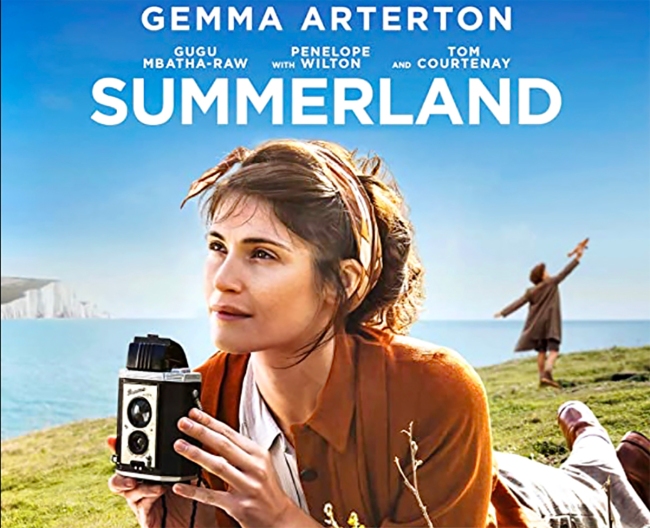 Viewers are willing to suspend disbelief provided filmmakers respect our need for plausibility. Narratives that take liberties with fate and coincidence must pay the price of being called contrived and inauthentic. The British war-time drama Summerland (2020) falls victim to this syndrome.

Set against the majestic white vertical cliffs, rolling hills and pebble beachlines of East Sussex, the storyline takes shape over multiple timeframes. We meet reclusive writer Alice Lamb (Gemma Arterton) at a typewriter displaying her permanently feisty demeanour. The village children enjoy throwing stones and taunting Alice as a witch because she lives alone and writes about myths and legends. One such incident triggers an old memory of a lesbian love affair with Vera (Gugu Mbatha-Raw) and their fear of social attitudes towards anyone different.

While London was being Blitzed in 1940, many children were evacuated and billeted in countryside homes until the war was over. One such youth, the curly-haired and wide-eyed Frank (Lucas Bond) was deposited into Alice’s care despite her protestations. The story becomes more predictable as it unfolds. After a tense beginning, the pair find some degree of mutual acceptance and even comfort. There is the inevitable bad news for Frank from the war front; the kindling of protective love by Alice; a near-death experience, an act of heroism and discovering the identity of Frank’s mother. The grand denouement is finding out that Frank’s placement with Alice was no coincidence, followed by a final act that leaves behind a sugary happy-ever-after taste.

Despite the beautiful but unoriginal British wartime ambience and cinematography, it is difficult to suggest reasons why this story was worth telling. The same-sex love scenes have little depth, no passion and only loosely book-end the film, so it’s hardly a meaningful addition to the LGBTI film oeuvre. Alice has few admirable personality traits and Frank’s sweet innocent face is not enough to offset his limited contribution to dialogue or narrative. The mythical kingdom of Summerland, when it does make its magical fantasy appearance, is a letdown in all the ways that matter.

In the absence of engaging characters, the hero of the story is the extraordinary white chalk cliff that features in several scenes, like a sentinel watching for the mythical Summerland. Apart from that, the film is just another moderately entertaining pretty picture with a plot rich in sentimentality but with little purpose.