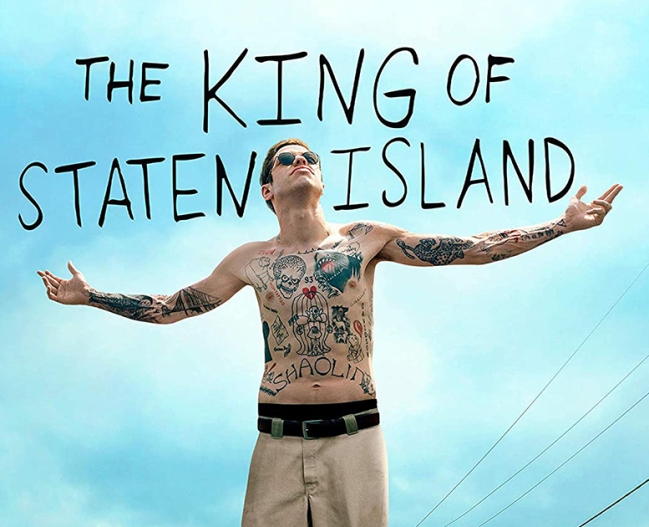 Two key drivers make or break a movie: characterisation and plot. It’s possible to love characters in a film and forgive weak narrative or be hooked by a story despite lacklustre people. But when both are tepid, the film struggles. That’s the problem with The King of Staten Island (2020).

The storyline is simple. We meet Scott (Pete Davidson) behind the wheel of a car in a nearly successful suicide attempt. A twenty four-year old dropout with unresolved grief for the father he lost as a child, he now lives with his mum Margie (Marisa Tomei) and sister Claire (Maude Apatow) and relies on regular weed to control his ADHD and Crohn’s disease. He also dreams of becoming a tattoo artist and practices on anyone who lets him. One day, a nine-year old boy asks for a tattoo but runs away in pain after a line of ink. His enraged dad Ray (Bill Burr) confronts Scott at home but backs off as a romantic spark is ignited for Maggie. Scott’s world soon explodes in a perfect storm: his girlfriend ditches him, his sister leaves for college, Margie and Ray start dating, and they want Scott to leave home.

Once the overall shape of the story is laid bare, each of its narrative strands twist and turn ever so slowly, as they meander through the second half of this two and a quarter hour film. Dialogue rather than action driven, there is little dramatic tension and a predictable narrative arc. Apart from a clumsy robbery attempt, much of what happens falls somewhere between ordinary and mundane. Pete Davidson fans may find humour in his wide smile, clownish facial contortions, and adolescent self-pity, but it is not readily apparent to others. The opening scenes promise insight into Scott’s mental illness, but this is never delivered, and his bumbling comic mask makes any serious effort to penetrate his psyche unfruitful. The supporting characters are largely underdeveloped, possibly to let more light shine on Davidson; if so, it hasn’t worked.

While labelled a comedy drama, the un-funny script and less funny delivery offer few laughs. It might have been a coming-of-age genre story if Scott was not already an adult and the story captured some of the poignancy of youthful yearning. But just as glimpses of serious awakening flicker towards the climax, the film’s credits roll on screen. The King of Staten Island misses the opportunity to be a probing portrait of a young man’s delayed journey to adulthood and is compromised by grasping at low-hanging comic fruit.