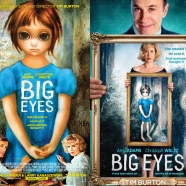 A good bio-pic tells more than just the story of an interesting person. It portrays them in the broader context of their era in ways that offer insight into human nature. Among the most recognisable motifs of the 1950’s are paintings of mournfully cute children with exaggerated large round eyes. They became known as the ‘big-eyed waifs’ created by artist Margaret Keane who is still painting at 89 years old. The film Big Eyes (2014) is a true story of the emotional violence and domestic captivity that lay hidden behind one of the biggest art frauds in history. It is also a moving tale of how these immensely popular artworks started as expressions of the artist’s pain but came to symbolise her personal triumph.

When we first meet Margaret (Amy Adams) she is packing her bags to flee a stifling marriage. She settles in San Francisco and gets a modest job painting pictures on furniture, but her artistic passion is painting children stylised with huge eyes. One day she is swept off her feet by a self-promoting extrovert and painter Walter Keane (Christoph Waltz) and they soon marry. His paintings are ignored while her artworks attract attention but the shy Margaret is not good at selling whereas Walter is a natural salesman. On the first occasion, he is mistaken as the artist by an interested buyer and the deception proves profitable. Despite Margaret’s misgivings, the ruse becomes the business model with Margaret secretly painting while Walter claims the credit from an increasingly voracious public who were prepared to pay good money for the ‘big-eyed waifs’. He becomes a celebrity and they enjoy their new wealth, but Margaret is psychologically burdened by the deception. Walter becomes increasingly paranoid and controlling to the point where she must flee again for her safety. Margaret keeps sending paintings to Walter to get his agreement to a divorce, but soon the burden of the lie becomes too much and she goes public. Walter declares that she is mad and the celebrated case was settled in court when the judge issued an impromptu order requiring both Walter and Margaret to paint a ‘big-eyed waif’ right there in the courtroom. The truth was immediately obvious.

This is an interesting and engaging film on many levels. It is a factual account of a multi-million-dollar art fraud that was committed not by professional criminals but by accident and chance. It was perpetuated because a talented woman was seduced by an unscrupulous conman who turned abuser, keeping his wife under lock and key to safeguard the secret. It is also a poignant story of an artist who painted over-sized mournful eyes through which her painful life was seeking expression. It is a bio-pic with little dramatic embellishment. Amy Adams plays the role of domestic-abuse victim with understatement and almost waif-like wide-eyed naivette. Christoph Waltz perhaps is not ideally cast for this role as his signature persona of predictable evil commences at too high a pitch but must keep rising to maintain dramatic tension. By the time they reach court, he plays an unconvincing ranting psychotic in a performance that is almost comical.

Big Eyes does more than tell the story of Walter and Margaret Keane. The cinematography, period sets and fashion captures the culture and style of the era. It reflects the history of women’s role in the pre-feminist era when they were assumed by nature and law to be possessions of their husbands. In recent interviews, Margaret confessed that going public was a “spur of the moment” act and she never could have imagined wilfully confronting her husband like she did. But from that time onwards, many of her big-eyed waifs have shown almost imperceptible hints of a smile.