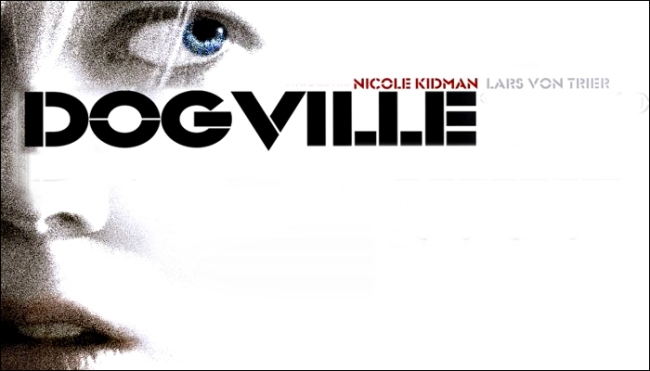 If you have never heard of Dogville (2003) you are not alone. Three hours is a lot to invest in what some call a blatantly anti-American diatribe in an experimental hybrid of theatre and film. But this avant-garde masterpiece should be seen, at least in part, by anyone who is serious about modern cinema. Danish director Lars von Trier has located the tiny hamlet of Dogville in America for many reasons but this allegorical meditation on the nature of evil and justice is as universal as the human condition, and is far more about a state of mind than a place.

If you have not seen it, some facts will prepare you for what is a unique experience. Dogville is set on a minimalist stage with chalk lines for roads and rooms, no doors, a few props to separate inside from outside in this closed, struggling claustrophobic Depression-era community that is suspicious of all strangers. Originally written in Danish by von Trier, the translation to English picks up a lyrical formalism which is precise and slightly stilted that allows more time to reflect upon the dialogue. The amorphous production setting intensifies the impact of acting, and the camerawork moves around quickly from close-ups to panoptic ‘eye-of-God’ viewpoints to flat long-view pans, all dynamically lit to create the illusion that this is a real town.

While the plotline is uncomplicated, the story is multi-layered and its interpretation challenging. The town provides shelter for the beautiful fugitive Grace who is so grateful she offers to work in return. The inhabitants progressively learn she is wanted by ‘the mob’ and police so they increase her work hours to “compensate” for harbouring her. They demand more and more compensation with each revelation, increasing her work  to hard labour from sunrise to sunset. Soon she is shackled by a leg-iron contraption and endures physical and sexual abuse in public. What appeared to be a benign hamlet becomes a hub of pure evil while the innocent and once-forgiving Grace learns about moral relativity and human failure.

This extraordinary film pivots equally on the genius of von Trier and tour de force acting by Nicole Kidman. While a long film, it continuously builds tension towards an unpredictable and chaotic climax, with the various elements woven into a single narrative fabric by the expressive gravitas and ironic humour of narrator John Hurt. But there is little to laugh at in this nihilistic film about the ever-present potential for evil in all humans. It begs the question why we do not see more experimental films like this? The question answers itself: they are too risky. This film is not for everyone, but it is mesmerising, intellectually challenging, and so worth the effort.