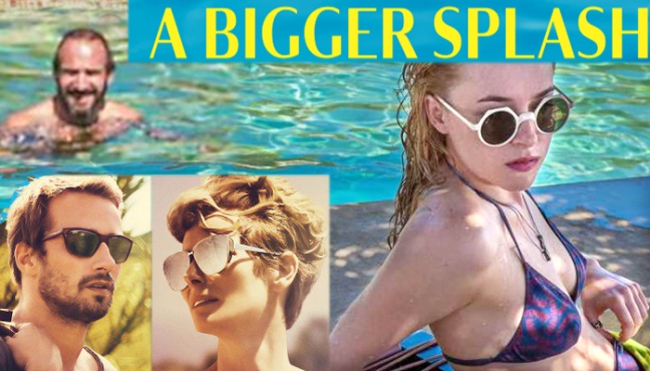 The getaway-retreat scenario is a common film device for creating a chaotic crossroad where divergent character types can bring their shady pasts, chronic problems and deviant desires. It works well in the melodrama genre because people act differently when brought together, especially in a luxurious or exotic location where they can let go and be who they really are: recent examples include Youth (2015) and The Grand Budapest Hotel (2014).  A Bigger Splash (2016) does this using a beautiful Sicilian hillside villa with a prominent pool for baring bodies and souls. To keep the plotline taut there are only four actors who play out in two pairs and the chemistry is anything but harmonious.

An almost silent Marianne (played by Tilda Swinton) is a once-famous rock star who is recuperating from throat surgery with her former alcoholic boyfriend Paul (Matthias Schoenaerts). They couple happily all over the villa until her extroverted and still-hungry former flame Harry (Ralph Fiennes) suddenly turns up with his sullen and sultry teenage daughter Penelope (Dakota Johnson). The tension lines appear quickly and the dynamics morph seamlessly towards an erotic thriller. Harry and daughter are overly physical with each other, Paul is derailed by the teenager’s libido, Marianne dabbles with forbidden fruit, while the men circle each other with malice. Harry’s use of his daughter as bait turns out to make him the catch while the beautifully photographed Sicilian landscape dwarfs four small lives and the mess they create.

All of the actors deserve accolades but Fiennes stands out for his ability to plausibly and expressively switch from manic exuberance to emotional vulnerability. He drives the story forward both narratively and as its primary entertainer. Swinton and Johnson are perfect for their respective positions on the femme fatale spectrum, and Schoenaerts captures what many will say is the most complex role of this story. With fine acting, classic landscape photography, a great soundtrack, and an engaging story to tell, one would expect that the whole would be greater than the sum of its parts. But this circular tale simply leads back to where it starts and leaves a vague feeling they have not gone far. As with so many films, it will be judged on its final moments.