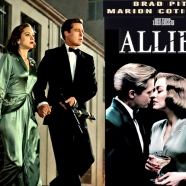 The classic ruse in the espionage thriller genre is to keep us in the dark about who is the double-agent. The film Allied (2016) is based on the premise that the romantic heroine might be a spy for the other side and asks what happens if she is caught. Beautiful filming on nostalgic locations and top-tier talent raises expectations for this film but they are disappointingly let down by an ordinary script and unconvincing performances.

In 1942, Canadian intelligence officer Max (Brad Pitt) is parachuted into Cassablanca to terminate a high-ranking Nazi. He poses as the husband of French Resistance fighter Marianne (Marion Cotillard) in order  to infiltrate local German society until the mission is complete. They become romantically involved and after the mission escape to London where they really do marry. The couple are blissfully happy until Max is informed that his wife is suspected of being a double-agent. If proven, he must execute her or he will be hanged for high treason. Furthermore, until the investigation is complete he must continue as if nothing unusual was happening.

Woven into this plotline are several action-filled twists to flesh out the narrative and to keep the audience guessing about Marianne. This film does not lack action but it does have a serious believability deficit. From the opening parachute descent, to the various set-piece shoot-outs until the final shot, there are just too many scenes that feel fake. For example, after carrying out the mission in full view of German soldiers they leave the building with as much panic as a couple rushing for a bus hoping nobody notices their machine guns are not baguettes. And after a German bomber is shot down outside their house they grab a picnic blanket and their baby to sit near the smoking aircraft as if lounging by a duck-filled pond. Regardless of how rugged or violent the scene, this espionage glamour-couple keep their makeup intact and fashionable clothes neatly pressed but are devoid of any chemistry or genuine emotion.

What works for the debonair James Bond with his legendary aura of British reserve-under-fire simply does not work for Brad Pitt. Bond has gravitas and panache; in this role, Max only manages parody. Flat lines like “I’ve looked into her soul” epitomise the plasticity of script and delivery. Once credibility goes, a film rarely recovers. Like many scenes in this film, the climactic moments are shallow melodrama whereas they could have been a real gut-wrencher. Apart from great photography, there is little to commend in this film.