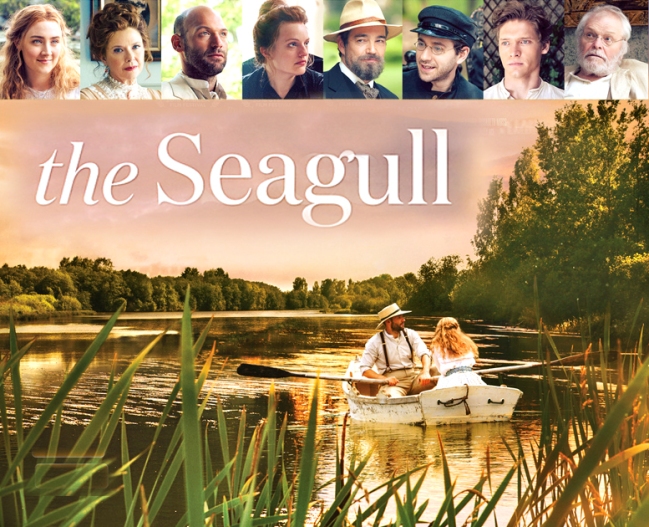 Fidelity of adaptation is a thorny issue in film discourse because it relies on the interpretation of context, characters, setting and script. If any of these do not respect the original, it is unlikely to satisfy. The American-made adaptation of the classic Chekhov play The Seagull (2018) meets all these criteria except the first, and that is one reason it will disappoint many.

The storyline is a crafted labyrinth of personalities and their foibles. At its core is a self-absorbed former grand diva of the stage, Irina Arkadina (Annette Bening) who is visiting her brother’s summer estate with her famous novelist lover, Boris Trigorin (Corey Stoll). Her son Konstantin (Billy Howle) is consumed by rage over his mother’s affair, a rage that spirals into suicidal depression when his own girlfriend Nina (Saorise Ronan) falls madly in love with Boris. At the periphery, there are more asymmetrical romantic pairings and victims of unrequited love who appear to exist simply to complicate the matrix of relationships.

Rather than have a forward-moving narrative,The Seagullis a collection of dramatic vignettes, each comprising a pair of larger-than-life characters mis-matched with someone they love without being loved in return. The film is without a hero or heroine and ends up exactly where it starts via an unusual repetition of its prolonged opening scene. Although seamlessly executed, the repetition creates audience confusion as a prelude to the film’s predetermined conclusion. Keeping track of the tangled mess of emotions is made possible by a stellar ensemble each playing a distinctly different caricature. There are a dozen lives on-stage yet each holds our attention, although Bening and Ronan dominate.

Together with stunning visuals, one would expect this film to soar, but it never reaches potential. The first criterion of a great adaptation is that the film should connect to the historical and cultural context of the story. Undisguised American accents undermine authenticity, and the film is silent on the escalating class hatred that was about to erupt in Russia’s violent revolution. It thus sanitises Chekhov’s work into an ahistorical capsule disconnected from its context. Perhaps a European production with genuine connection to European history may have avoided this limitation.

There is still much to enjoy in this film. It reads equally as tragedy, romance, and comedy of manners, but falls away as Russian period drama. Richly melodramatic but without forward momentum, the pace feels ponderous and the repeated opening scene feels more like gimmickry than a functional structural device. If Chekhov were here, it is unlikely he would rush to see it.