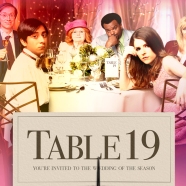 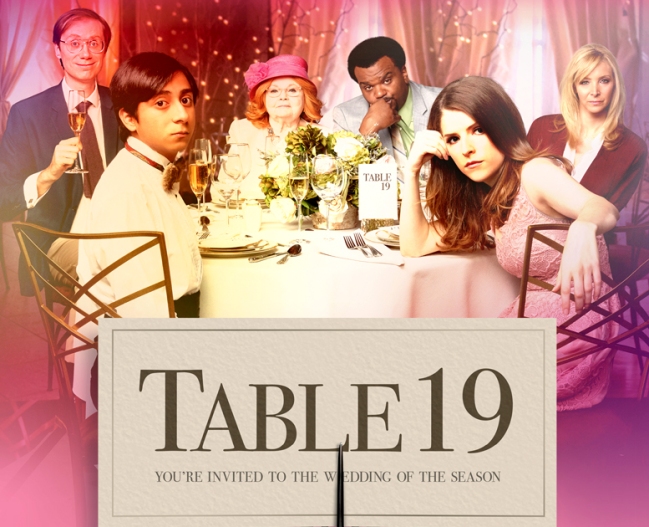 Trailers are notorious in over-promising for movies that under-deliver. But every now and then, one pops up that does the opposite. The trailer for Table 19 (2017) gives the impression of a lightweight romantic comedy with a touch of slapstick, all framed around a wedding. Despite being critically panned by many, there is more to this unexpectedly entertaining low-profile film than meets the eye.

The heroine is Eloise (Anna Kendrick) who, against her better judgement, accepts a wedding invitation knowing she is persona non-grata with the bridal party. She was recently dumped by the bride’s brother, who is now the best man, and she is suddenly no longer the bride’s best friend. She was the chief helper with the reception planning and knows who is at every table and why they are here. Her companions on Table 19 comprise a lovable granny-type, two oddballs, and a quarrelling married couple. They were all expected to decline their invitation but still send a gift, and that alone is a recipe for humour and satire. Their distance from the bridal table and proximity to the toilets quickly establishes their lowly social status and the comic sketches play on social awkwardness. The thread of continuity is through Eloise and her manhunts. The standard sit-com one-liners and the obligatory near-catastrophe with a wedding cake are neither original nor particularly funny, but the situation develops a warm emotional undercurrent that is unexpectedly touching.

One of the interesting things about this film is the difference between its plot and story. The plot is standard wedding reception comedy which laughs at the marginalisation of unwanted guests. On the other hand, the story explores why the Table 19’ers are together. It offers insight into their lives, their personalities, and the emotional hurt caused by being placed on the social fringe. The best part of the film is when the offended “randoms” leave the reception for a while to console each other. Through flashbacks we get the back-story to their invitations which range from pathetic to comic. For example, the granny-type really believed she was invited because the bride fondly remembered her first baby-sitter, but the bride barely knows who she is.  There is also a wannabe trying to lose his virginity, a weird guy straight out of prison, and a couple who are far from an inspiring example of a loving marriage.

Anna Kendrick plays the perfect balance between awkward, aggrieved, and aggressive, and the randoms are standard comic stereotypes. But while our eyes are on Elosie, the warmth of the story come from her table companions. The gags are at snicker level rather than belly laughs and the cinematography is colourful and cluttered as wedding receptions often are. There is no shortage of embarrassing moments as Eloise stalks her men, both old and new, and the final scenes rise through melodrama to operatic farce. But this film offers a fresh take on standard rom-com themes in amusing and entertaining ways…. and it might make you think twice if you need to create a seating plan.