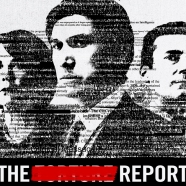 It is hard to watch a film like The Report (2019) and not feel the heavy weight of its bigger picture.  After all, the depicted events are recent enough to affect current attitudes to USA government, especially under a presidency that regularly subverts the separation of powers.

Based on extensive factual evidence, ‘the report’ in the film’s title was originally known as The CIA Torture Report. It was compiled over five years by investigative staffer Daniel Jones (Adam Driver) who worked for Californian Democrat Senator Dianne Feinstein (Annette Bening). Its purpose was to examine the role of the Central Intelligence Agency in using ‘enhanced interrogation techniques’ for extracting intelligence from terrorists captured after the 9/11 attack. Euphemisms aside, the report was about the CIA’s use of brutal and inhumane torture, illegal under American and international treaty since 1984.

There are two extraordinary revelations in the film. The first is that two mediocre psychologists, with no practical interrogation experience, convinced a gullible CIA that their techniques would open treasure troves of terrorist information.  They had no research to back their claims and were little more than snake-oil merchants preying on the infinite budgets that were pumped into post 9/11 hysteria. After years of interrogations in notorious Guantanamo Bay, the report revealed that no useful information was extracted, several prisoners died in the process, and about a quarter of the ‘terrorists’ were subsequently found to be innocent.

The second revelation is the scale of institutional corruption emanating from the highest level of the CIA as it thwarted the Senate Committee charged with its oversight. The hacking into Senate Committee files, the subsequent cover-up, and the refusal to admit to crimes and atrocities were swept under the carpet. So morally complacent had the White House become, even President Obama refused to condemn what the CIA was doing.

Despite the desk-bound inaction and dialogue-heavy script, this is a riveting and important film. Its tension curve is driven by the enormity of CIA criminality and Adam Driver’s ability to portray a humble David who took on an arrogant Goliath; Daniel Jones’ bravery and commitment to truth was remarkable. Annette Bening is adequate as Senator Feinstein, although constrained by the realpolitik of her role. With President Trump on record saying he has no objection to torture, this film sounds a loud warning. Lest we forget that official barbarism infects an entire country.