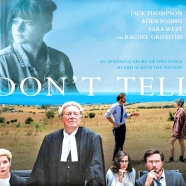 The courtroom drama Don’t Tell (2017) is both a quintessentially Australian film and a story of universal relevance. The landmark case depicted in this film snowballed into the world’s biggest commission of inquiry into child sexual abuse which is due to report later this year. Its findings will reverberate around the globe.

The film tells the story of abuse survivor Lyndal (Sara West) who was an eleven-year-old victim of a paedophile priest at a prestigious Anglican boarding school. Now a young woman, she has endured years of substance abuse, self-harm, and loss of self-respect as a victim not believed. She is also volatile, brash and contemptuous of all authority. A struggling local lawyer Stephen Roche (Aden Young) reluctantly agrees to take her case against the massive financial and political muscle of the Anglican Church, assisted by barrister Bob Myers (Jack Thompson). The Church offers her ‘silence money’ and Lyndal is urged to accept but she only wants justice. When the facts of the abuse are uncontested in court, the crux of the legal and moral drama shifts to the spectacle of a major religious body callously manoeuvring to protect its institutional reputation and winning at all costs. Lawyers for the school admitted that the abuse occurred but claimed it could do nothing because it was unaware. Forensic legal research uncovered school governance documents that made it clear the school did know but chose not to act. This was to be the tip of an iceberg that had unimaginable consequences.

In the wrong director’s hands, this film could easily have descended into victim melodrama or a dry ‘David and Goliath’ legal battle. Instead it is a finely balanced deep scar-tissue examination of the emotional impact of child sexual abuse, portrayed against the background of a well-directed reality courtroom drama. The filming captures the iconic Australian country town feel juxtaposed against the moral brittleness of a legal system that favours perpetrators of abuse and disempowers victims. The acting is excellent across the entire cast. Jack Thompson is superb as the imperious barrister while Sara West’s performance as the damaged Lyndal is outstanding. It is a complex role full of anger that could easily have alienated audiences but Sara’s ability to depict pain and vulnerability easily wins empathy.

The enormity of this story cannot be overstated nor is it of historical interest only. It is entirely because of the bravery of victims like Lyndal that governments around the world can no longer claim they are unaware of the risks to children in care. Even those nations that have not yet taken steps to protect the young will know of the impact of these crimes. This brillant film should be seen around the world, not as entertainment but for insight into the horror suffered by abuse victims and the moral abhorrence of institutional denialism.