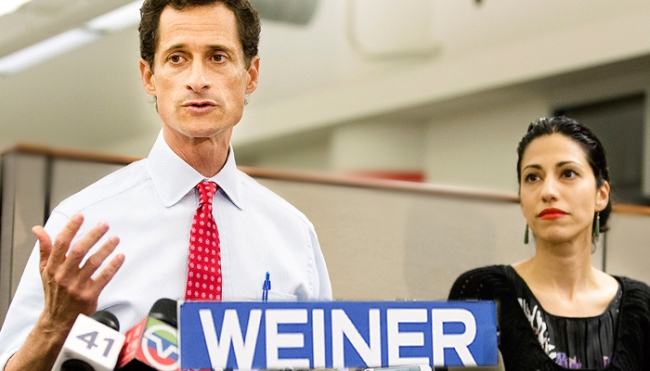 While watching Weiner (2016) it is easy to forget that this is a reality-based documentary not a fictional sit-com or tragi-drama. The film presents two possibilities: we either expect too much of politicians or the subject of this movie is a uniquely disturbed aberration of the political class. Either way, this compelling and well-produced documentary is essential viewing for anyone interested in professional politics and the impact it has on those who seek power.

Using ‘fly-on-the-wall’ documentary style and archival footage, the film tells the story of Anthony Weiner whose name is now laughed at around the world. As a Democrat Congressman from 1999 to 2011 he gained national attention for his vocal advocacy for working-class Americans. His career was shortened when he texted sexually suggestive images of himself that, in conservative America, was enough to finish him in politics forever. But Weiner’s charisma and boundless energy saw him re-emerge in 2013 to campaign for Mayor of New York under a banner of mea culpa for past errors. He was well ahead in the polls and just as his redemption appeared secure there were further revelations that showed he was still a serial ‘sexting’ offender. His popularity immediately plummeted. The film documents the impact on his wife and campaign staff and the sense of betrayal by a public that had been warming to his revival but had now lost all faith. He was stuck with a reputation as a pathological liar, a sexual transgressor and an unfaithful husband. While the film is mainly focused on Weiner, the silent heroine of the film is his extraordinarily talented wife Huma Abedin, a senior aide to Hillary Clinton. The words “spousal abuse” are heard in this film but left unexplored.

Why is it so fascinating to watch a psychological train-wreck in slow motion? Weiner represents a modern-day conundrum of public life. His transgressions are far less than those of former President Bill Clinton or many others and whatever he did wrong it involved him and his cell phone only. Being a noisy Jewish Democrat who fought tooth and nail for national health insurance made him an easy target for conservative media and the early success of his comeback campaign threatened many interests. Audiences will judge Weiner based on their own politics and sense of morality, but history is unlikely to be kind. This is a fascinating documentary that offers a unique glimpse into a dynamic but fatally flawed narcissist who is either a profoundly dishonest person or we, the people, need to be more forgiving about human weakness.