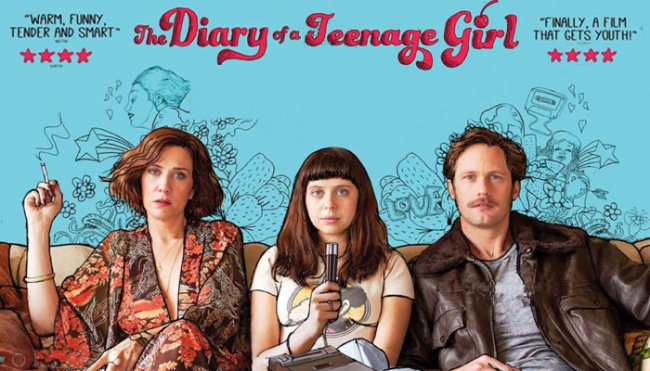 Given the global angst over institutional paedophilia it is not surprising that The Diary of a Teenage Girl (2015) is generating controversy. Views are divided about whether this coming-of-age teen pic glamorises statutory rape or portrays a lonely teenager’s exploration of self-identity and womanhood. Based on an autobiographical novel, the film defies easy labelling because sex between a 15-year old girl and a 30-something male in hedonistic 1976 San Francisco did not mean what it means today. Film is about storytelling, and showing does not equal condoning. We know it happens and no amount of legal and moral argument can change that. So only one question matters here:  does the film work?

This is a beautifully self-narrated story of a butterfly emerging from a lonely, self-loathing teenage-hood. The plot is deceptively simple. Aspiring cartoonist Minnie is 15, thinks she is fat and ugly, lives with a self-obsessed and neglectful mother, and loses her virginity to her mother’s boyfriend. The mother finds out (of course) and their worlds do not collapse. Played with wide-eyed innocence and disarming authenticity, British actress Bel Powley empowers the film with humour, pathos, and a degree of unrestrained youthful libido that speaks volumes for Minnie’s rite-of-passage story. This is not about titillation and the intent is not salacious. Those offended by nudity can fast-forward, but scenes such as Minnie standing alone and naked watching herself in front of a mirror scream out self-doubt, fear and longing for love as she strides towards womanhood ahead of her years. The voiceover narration is expressive, well-written, funny and offers an intimate view into the very heart and soul of an ordinary teenager dealing with what life throws her way. The cinematography is evocative of the styles, colours and psychedelic attitudes of the 1970s, yet in some ways also shows how little has changed over four decades.

Not everyone will agree, but part of the bigger story is about sexual equality. In real life, 15 year olds of all sexuality grapple with similar challenges and the big screen favours some over others. The search for love and identity are two of the constants of life, and this film shows something that most of us have experienced in some way. Unfashionable though it may be to admit it, I found this film quite touching.