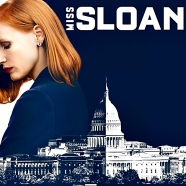 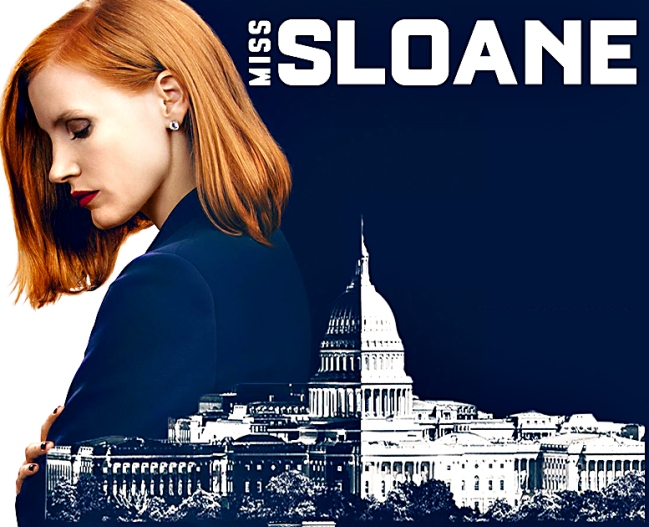 Stiletto power, political corruption, and stopping the gun lobby: that sums up Miss Sloane (2016). But like everything in cinema, describing its contents is easy compared to explaining what this film is really about. At one level it loosely belongs to the superwoman genre that inspires shock and awe at what women can do, only this time in the halls of political power. At another it is an exposé of political corruption in which lobbyists game the system that we refer to as democracy.

Miss Elizabeth Sloane (Jessica Chastain) is a super-smart lobbyist who is ruthless, cunning, untrusting, and will stop at nothing to win her cause. She knows the game of politics inside and out, and is both respected and feared for her win-at-all-costs approach. Her private life is messy: she is an insomniac, a substance abuser, has no friends and hires escorts for late night wind-downs. We meet her answering a Senate Committee about some procedural irregularity, then the story plays in flashback where we see her walking out on her employer because their client, the firearm industry, opposes even the mildest gun-control reform. She takes most of her team with her to a smaller but principled firm that gives her a free hand to win over uncommitted senators in supporting new gun laws. The firearm industry is spending mega-sums of money to block the laws and Miss Sloane. She is also fighting against her former employer and colleagues. They know what she is capable of and it scares them.

The storyline is a classic ‘femme fatale battles the big boys’ except that Miss Sloane is no blushing rose. While she is fluent in both corporate-speak and the language of social-principle, she is an amoral political warrior who waits to see the whites in her opponent’s eyes and then strikes for maximum carnage. At this level, the story plays out like a gripping political thriller and Jessica Chastain is brilliant in depicting the twin hydra-headed monster of attractive woman and political assassin. This is not a big-narrative film packed with dramatic action. Rather it is dialogue-rich and viewers will need to be alert for the rapid-fire jargon about the politics of gun control. If you stay with the flow, it is a film full of insight into how single-issue politics can be manipulated by lobbyists who distort the institutional relationship between elected representatives and the law-making process.

Some may describe this as a post-feminist celebration of powerful and smart women, others as an endless talking heads fest. There is no doubt that feminism is in the frame because if it was called ‘Mr Sloane’ then suddenly there is no story. That alone is an indictment of how far we have progressed in the equality domain. If you have ever worked in government or have an interest in the political process, this film is highly engaging; if not, don’t bother. It is a tense thriller with several twists and turns, but none greater than its elaborate and contrived finale.