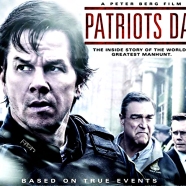 The disaster movie is one of the oldest film genres and has a special role in public information. This is particularly true in the era of global terrorism. It’s a box-office judgement call how far a movie should go in embellishing the facts with dramatization rather than staying close to what really happened. The film Patriots Day (2016) made a high-risk call by creating two competing stories where one would have been more than enough.

The basic facts are on the public record. On 15 April 2013 two bombs were detonated by Chechen-American brothers during the closing stages of the famous Boston Marathon. Several people were killed and hundreds were injured. A manhunt of unprecedented scale followed, the city went into lockdown, and over the next few days one brother was killed and the other captured. Woven around these facts is a thriller-drama focused on fictitious Police Sgt Tommy Saunders (Mark Wahlberg) who is assigned to patrol the race finishing-line area. Through his eyes we see the chaotic aftermath and carnage caused by the explosions. We follow the first and second wave-responders onto the scene, see the FBI take command when it is declared a terrorist attack investigation, and witness key stages in the investigation through to its climactic moments.

With real-world material like this, Patriots Day should have been brilliant but it is not. The fast-moving core narrative, the archival footage, and excellent filming, editing and directing, are all the ingredients needed for a top-shelf docu-drama. Although we learn very little about the terrorists’ motivations and background, the big picture is informative. However, the multiple storyline digressions into lesser melodrama dilute the film’s achievements. Using a Sgt Saunders as an avatar for all emergency responders is not a bad idea, it is just that the character is poorly developed and his tantrum-prone small personality is out of place in the context of such a major disaster. There are several references to his suspension for an unspecified misdemeanour, but the director leaves it as a loose end.

The narrative logic of such a strong focus on Saunders is undeveloped and there are too many melodramatic diversions. In the huge warehouse where the FBI reconstructs the crime scene, he walks the layout like a mystical wizard providing key clues that single-handedly identify the terrorists, and he just happens to be everywhere in Boston where the terrorists are fleeing. Really? Logic takes more strain when he sermonizes that the dead and injured should not be called victims but peace ambassadors. It’s human nature to re-define tragedy as triumph, but such shallow grandstanding casts a propaganda pall over the film.

Despite its limitations, this is an important film with much to commend it. For the most part, it is a fast-paced gripping drama made more so by the knowledge that the events really happened. For audiences outside the USA, this film goes beyond the reported facts to provide the back story with a high level of realism. The fictionalised part of the story is disappointing and distracting. The true story, however, is informative and shows how quickly and compassionately real people become real heroes in the midst of tragedy. Whether the film honours heroes and victims or exploits them is your call.