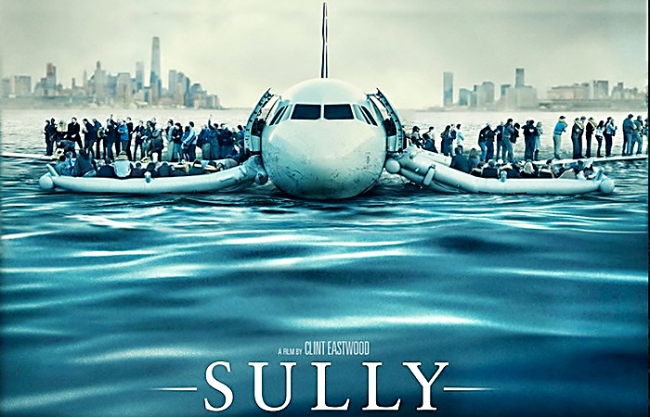 True story bio-pics based on real disasters have little room for creativity because a major aviation incident like landing in the Hudson River is so forensically documented. However, the real disaster in Sully (2016) is not landing a plane in a freezing river, but the hysteria of the media, airlines, insurance companies and safety investigators, who all voraciously pursued their own vested interests by undermining the professionalism of a modest pilot who saved the lives of everyone on board.

The central incident unfolds only minutes after take-off on 19 January 2009 when Captain Sullenberger (Tom Hanks) realises that his Airbus A320-214 has lost both engines on hitting a massive flock of Canada geese. His options were to glide back for an airport landing while losing altitude over a densely populated city, or go for an unprecedented water landing onto the Hudson. His decision made history and he was immediately lauded as a hero until the media’s appetite for the dark side of humanity turned the incident into a witch-hunt.

Asking was he a “hero or fraud”, the really big doubters were those with most to gain if human error could be established. While aviation interests quickly pitted computer simulations against real world decision making, Sully remained focused on cockpit logic. The film spends most of its 93 minutes exploring the incident from different perspectives and director Clint Eastwood’s masterful storytelling is a perfect mix of facts and human insight.

It is hard to imagine any actor who could fill this role as well as Tom Hanks. He captures the understated gravitas of a modest hero whose job exists at the fleeting intersection between saving and losing lives. The filming style draws you into its vortex while being mercifully light on CGI effects. We watch over Sully’s shoulder at the controls then study his face during the critical minutes, before switching to panoptic views from the clouds.

The most outstanding feature of this film is the way it frames the narrative and its aftermath, with flashbacks and parallel sub-plots that piece the story together like an elaborate jigsaw puzzle. Disaster films are usually just action dramas, but this one is much more than that. It has the intensity of a psychological thriller as we watch Sully’s own confidence being undermined in the battle between sterile computer algorithms and the kind of intuitive judgement that comes from four decades of flying. This is a thoroughly riveting film.