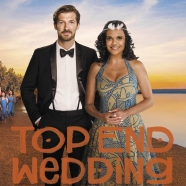 At first glance, Top End Wedding (2019) appears to be aimed exclusively at its home market, with all the trimmings of Aussie rom-com cliches, plotlines, and characters. For the first two-thirds of its run time, that’s exactly what you get in a moderately entertaining format. Then it suddenly becomes a very different film.

Ambitious young Indigenous lawyer Lauren (Miranda Tapsell) is promoted on the same day her boyfriend Ned (Gwilym Lee) quits his job. Before she can tell him the news, he pops the question and her promotion is immediately overshadowed by wedding plans. She has ten days leave from her new position and insists that their wedding take place in her home town Darwin, in the ‘Top End’ of Australia. When they get there, Lauren’s mother Daffy (Ursula Yovich) has disappeared, and her neurotic Aussie dad believes she has run off with her personal trainer. The couple embark on a road trip to find Daffy because Lauren will not wed without mum by her side.

It’s a corny narrative arc, full of slapstick, outback gags, and Ozploitation humour. But it also gives the camera an excuse to dwell on the beauty of Australia’s rugged interior: wide landscapes, cavernous spaces, and endless rich red earth. This travelogue for an ancient land full of wonder moves onto the Tiwi Islands, a little-known sanctuary of tradition in today’s troubled world. At this point the film switches from cornball to a poetic essay on family bonding and cultural belonging. There are many emotionally rich scenes of reconciliation, reconnection, and ancient customs that will bring the tissues out in any cinema.

This is a mixed film with several quality ingredients. However, it’s achievement boils down to three things: the authenticity, charm, and emotive range of Miranda Tapsell; the sincerity with which the film concludes this universal tale of belonging; and cinematography that is especially sympathetic to its subject. A picky review might point at the tepid ‘rom’ part of this rom-com and ask whether Gwilym Lee has the chemistry for working with Tapsell. It could also ask why Ned had to propose on the day he quit his job, or how Lauren’s slave-driver boss turns up as wedding coordinator. But this and other trivial issues do not detract from the film’s bigger charm.

Top End Wedding goes well beyond being an entertaining story about the importance of belonging. Released into the midst of a national debate on a constitutional voice for our First Peoples, it is a message-stick reminding us that the Australian national identity is incomplete until we embrace our Indigenous heritage.