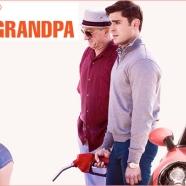 After watching Dirty Grandpa (2016) my first reaction was how quickly can I flush this movie from memory? Top critics around the globe have panned it as awful, crude and unfunny, despite it starring the venerable Robert De Niro and quickly earning $90 M (USD) in box office from a $11.5 M (USD) outlay (beating many other well-reviewed films). Have the critics been overly swayed by the film’s puerile humour, vulgar language and incongruous adolescent antics played out by a grandfather figure? And while we are talking ageism and gender equality, why has the foul-mouthed Grandma (2015) starring the also revered Lily Tomlin been reviewed so kindly when the story themes are not that different? With so many films featuring outrageous language, humour, and behaviour, could it be a bridge too far when a 73-year old cinema icon swansongs an illustrious career in such a subversive anti-establishment way?

In genre terms, this is a standard father and son road film where self-discovery, redemption and familial bonding are the destinations, similar to Nebraska (2013). Grandpa has literally just buried his wife after 40 years of marriage and uses the sympathy card to trick his estranged grandson Jason (Zac Efron) into driving the three-day road trip that was planned with his wife. Jason is an uptight conservative lawyer about to marry his boss’s snooty over-controlling daughter and his future as a corporate partner appears secure. With the wedding only a week away, the trip becomes an odyssey of booze, karaoke, a beach ‘flex-off’, girl chasing and other bawdy behaviour. Grandpa calling their pink convertible Mini Cooper the ‘giant labia’ sums up the tone of the journey. Along the way, Jason finds his undiscovered self, revisits his closet ambition to be a photo-journalist, and his tidy life plans look shaky. The rest you can guess.

Standard comedic stuff, you might say, sure to get a laugh. So what went wrong? This is another film that almost worked, but poor post-production decisions cost it dearly. Editing out excesses of gratuitous profanities, juvenile hip-thrusting and other genital and coital references might have appeased the baying hounds and lifted this comedy to another level. But then it would not have been Dirty Grandpa. Maybe when grandpa De Niro says the trip is “not about guilt but redemption” he is referring to the casting straitjacket he has worn in so many films with this one his last chance to break out. While this film will not do much for the De Niro legacy, if you can ignore the inane smut you will find some laughs. Anyway, why cant baby boomers let it out?