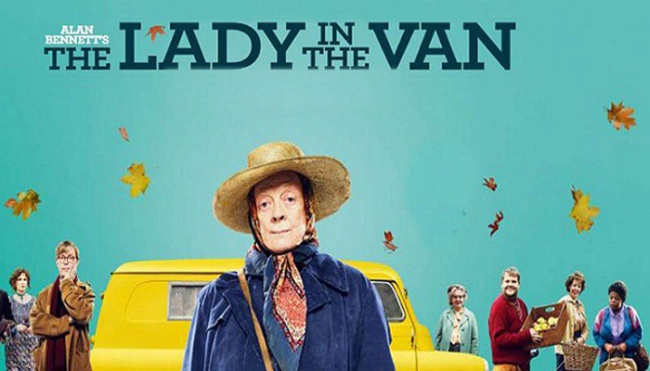 Like most movies, The Lady in the Van (2015) contains several stories that can be layered according to taste. At different levels you can find themes about ageing, mental illness, poverty, the British class system, and the social stigma of being eccentric, gay or just different. The common link between all of these is in the film’s focus on personal relationships, and for the most part it adopts the conventions of comedy drama to portray two unusual people who are drawn to each other because of their complementary peculiarities. Its not the laugh-out-loud kind of comedy, but the wry ironic kind that produces a smile at the humorous side of how some people live their lives.

The plotline is simple and linear. Based on a mostly true story from the 1970s, Mary Shepherd is an ageing, smelly and eccentric vagrant who keeps parking her live-in van in front of various unwelcoming homes. One new homeowner, the playwright and closet homosexual Alan Bennett, appears more charitable and eventually allows her to park in his driveway which is where she stays for the next 15 years. The whole film is a slow portrait of a fractious relationship between two misfits, with the only additional narrative interest provided by Bennett’s internal dialogue with his alter-ego, a device that becomes a reflection upon his disconnected life as a writer, a user of rent boys, and a carer for a mother with dementia. His ambivalent relationship with Shepherd adds meaning in his life, replaces the mother he is losing, and offers new material for his writing.

The film could easily have been a disaster except for the venerable Maggie Smith and her ability to plausibly bring the imperious airs but not manners of Downton Abbey to the squalor of a smelly van. Her performance is so strong that in many scenes you almost do not notice her filthy lifestyle, so expressive is her gaze and clever is the script. Alex Jennings as Bennett is a strong support, and conveys the closeted world of a gay writer struggling on several emotional fronts. The acting, sets and filming style are all so British in their self-restraint and understatement, with the only visual vibrance provided by the screaming canary yellow paint that Miss Shepherd applies to her van. If you enjoy character rather than plot-driven stories, particularly portraits of peculiar people, it is very likely you will appreciate this film.