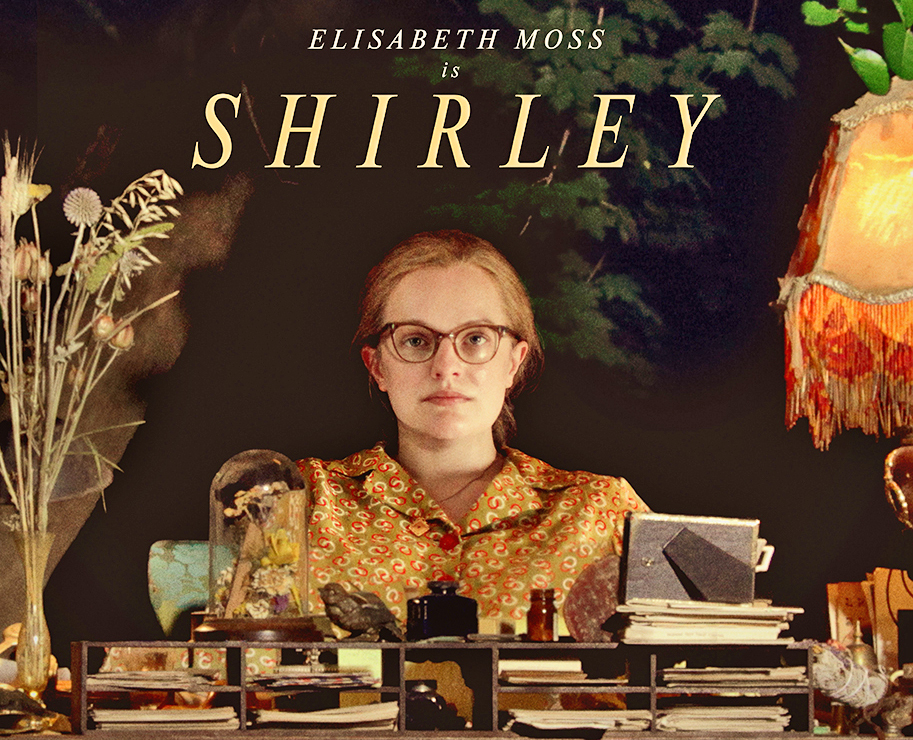 Film labels should not matter but they do. Variously called a bio-pic, thriller, drama, and horror, the film Shirley (2020) suffers from a crisis of identity that is mitigated only by the performance of its principal star.

Best described as a biographical melodrama, the film is based on a relatively brief period in the life of acclaimed American horror writer Shirley Jackson (1916-1965). Portrayed as a heavy-drinking acerbic malcontent, Shirley (Elizabeth Moss) is also a prolific writer who lives under the shadow of a philandering and manipulative husband, college professor Stanley Hyman (Michael Stuhlbarg). Into their fractious domestic world arrive two upwardly aspiring innocents: Rose and Fred Nemser (Odessa Young and Logan Lerman), who hope to make their mark in the academic world. The couple soon find more than just great literary minds.

The four characters form age, gender, and power binaries that spin a twisted web of psychological game-playing. With little narrative action, the film’s forward momentum is driven entirely by dialogue and a script that vacillates between clever, pretentious, and banal. Shirley’s sinister side-glances and crazed stares behind thick-rimmed glasses are all too obvious horror tropes that somehow never fulfil their intended effect, despite Moss’s ability to hold audience attention like few other actresses can.

While Stanley and Fred adequately anchor an ‘old dog-young dog’ fable, it is the dynamic between Shirley and Rose that generates the tension which holds the film together. Edgy hand-held camerawork and off-centre angles mirror the instability of the famous writer whose unfiltered outbursts would today place her on the spectrum of mental disorder. Shallow depth of field at critical moments lets the camera show rather than tell us of the fears and vanities of all four characters.

For those who know little of Shirley Jackson, this film may help memorialise an icon of American horror short-story telling (however unflattering the picture may be). For others, it’s a limited and claustrophobic look inside a turbulent marital partnership through feminist themes of victimhood. None of the labels applied to the film sit comfortably; however, calling it a melodrama would have been more accurate but made it a harder sell.