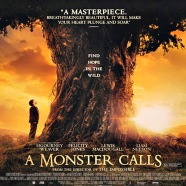 Don’t be fooled: it may be labelled a fantasy but the content of A Monster Calls (2016) is brutally realistic. And ignore the trailer: it does not come remotely close to describing a story of the horrors inside a young boy’s mind as he helplessly watches his mother deal with terminal illness. Too bleak for young audiences and mislabelled for those older, it is one of the most gut-wrenching films this writer has seen in a long while.

There are two closely interwoven storylines at play: one is a magical fantasy, the other a tragic drama. Thirteen-year old Conor (Lewis MacDougall) is withdrawn and bullied at school as he experiences raging frustration over his mother’s (Felicity Jones) worsening illness. Each time the hospital unsuccessfully tries a new treatment his hopes are dashed. He has fits of destruction and is desperate to understand what the grown-ups are keeping from him. He hates living with his strict grandmother (Sigourney Weaver) and his remarried father (Toby Kebbell) leaves him feeling even more abandoned. Nothing can break Conor’s cycle of despair and time is running out. Drawing deep from his young sub-conscious memory, he reconstructs a monster story told long ago by his mother, one that empowers his desperate search for a happy ending. Her long-forgotten painting of a magic yew tree like the one outside his bedroom becomes his psychological crutch and he fantasises it as a powerful magical sage that can cure her illness. The tree comes to life with destructive menace to others but kindness towards Conor as it tries to teach acceptance of things that cannot be changed.

The brilliance of this film lies in the way that story unfolds not just from Conor’s point of view but from deep inside his turbulent mind. Conventional cinematography and narrative structures position us where the director wants us, but this film goes much further. Through the sincerity and emotive power of the amazing young Lewis MacDougall, we viscerally feel what he is feeling. While we see magical happenings on screen, the role of monster and magic in this narrative is entirely cathartic. Some viewers may need a degree of forgiveness for the unimaginative CGI tree monster and its magical doings. The sinewy hyper-masculine beast with lights flashing from every crevice might startle ten-year olds but it is a tame cliché for older viewers. Some of its dialogue sounds preachy like “heroes don’t always win” and its make-believe destructiveness can be repetitive. But these are minor distractions compared to the emotional punch this film can deliver.

Conversations about death and grief are difficult at any age. From the outset, the film’s narrator explains that Conor is somewhere between boy and man. By the end of his sad journey, he has grown emotionally and learnt about letting go. Much more than just entertainment, this sensitive coming of age tale is an honest conversation about some of the most complex feelings a human can ever experience.