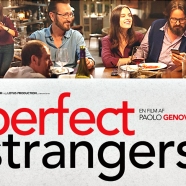 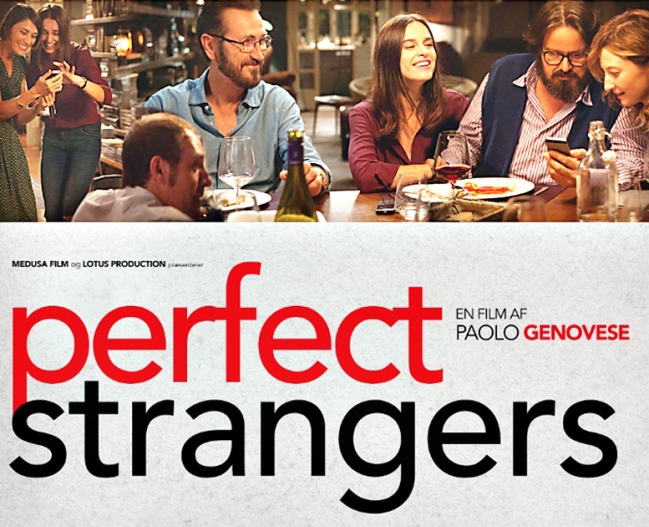 A lot of water has passed under the bridge since The Big Chill (1983). It was the movie that immortalised the ‘gathering of old school friends’ as a narrative premise for revealing hidden truths and showing that friendship is the first casualty of honesty. The Italian comedy of manners Perfect Strangers (2016) follows this path but updates it with themes of technological intrusion, marital hypocrisy and sexuality closets. The result is a cross between a squirm-in-your-seat farce and a reality TV show where everyone goes home alone.

Seven friends gather for a dinner party and amidst the bonhomie over drinks friction points appear in every relationship. As often happens in long-term friendships, they know enough about each other to stay in touch but know too much for comfort. Three are married couples at various points on the harmony scale and the single divorcee has come alone despite expectations that the group will meet the new girlfriend. The hostess Eva, a therapist, chats about iPhones as a modern day black box full of secrets kept from partners. She suddenly suggests a party game where everyone puts their phones on the table to share every incoming call and message to show that they have nothing to hide. Once this premise is locked in, the consequences are funny, chaotic and predictable.

After a heavy breathing prank call from a friend in the kitchen, this Russian roulette of secrets gets more and more serious and the eye movements around the table more jittery. The hostess is the first to be embarrassed when a message reveals she is having her “boobs done” and another friend is caught out scheming to move her mother-in-law into a nursing home. One by one, the secrets tumble out including marital infidelities and gay outings. The dialogue-rich script and the well-paced story is propelled entirely by the tension of not knowing what will be revealed next.

This is intelligent humour for contemporary times with the ever-dwindling gap between the public and the private. The gags and one-liners are fast and cutting to capture the kind of things that friends might think while sober and voice out when not. For audiences who do not speak Italian, the dialogue is delivered at Mediterranean speed and the sub-titles undoubtedly miss nuance. The escalation of disclosures and amplification of impact produces a stage play-like atmosphere reminiscent of a French farce gone wild. But it all adds to the chaos as the fabric of friendship is torn asunder in what is an entertaining if voyeuristic over-the-fence look at how others live their lives.