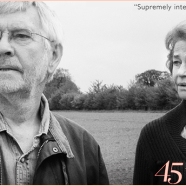 How can British filmmakers convey so much with so few words and so little action? Even the title, 45 Years, is code for adult life-cycles: how do we fill them, what do they mean. Without words, the opening scenes of a lone person walking across mutely coloured panoramas of a misty English farm signal that this tale is an introspective reflection about the passage of time. And the film has barely begun.

The storyline is laid bare within minutes, then the entire film is a study of how married couple George (Tom Courtenay) and Kate (Charlotte Rampling) react to the news that the body of George’s first love Katya was found preserved under deep ice in a Swiss glacier. He is invited to claim the body as next of kin, a status he had faked 50 years ago so they could travel and sleep as a couple. George and Kate’s 45th wedding anniversary is a few days away but in just one moment of time their relationship changes irrevocably. Too frail to go to Switzerland, he is distracted by her memory and how she must look now frozen in time, and what if she could see him half a century older? Having known nothing of Katya, Kate withdraws into herself to question the foundations of their long marriage especially after learning that he had planned to marry Katya. Knowing that she died pregnant cuts deeply into the childless Kate who feels her life has been based on a lie.

Rampling and Courtenay are simply magnificent in these roles. There are few actors who can so naturally make a faintly uttered word, a glance, a gesture, so heavily laden with meaning. George is revitalised by the memory of what might have been, while Kate is haunted by a half century corpse, and the tension between them is played out like two people who have danced with each other forever. This is a visually beautiful film in which very little happens, except that everything does. While it is about life-cycles and memories and marriage, it is also a gendered probe into how men and women are so emotionally different. Had the roles been reversed, would George be as shattered? Would he re-define himself as the second choice? As they move together in their anniversary waltz, two people have never danced so alone.