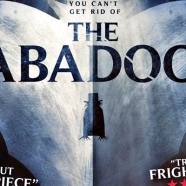 Its odd to think that film audiences pay good money to experience fear, confusion and even physical discomfort.  Maybe it is to heighten the pleasures of everyday normality after the show.  This film is an unusual hybrid of two closely related but different genres for which Australian filmmakers are acclaimed around the world: the horror and the psychological thriller. The former emphasises bloodshed and the supernatural, the latter leans toward forms of madness with bizarre and deadly outcomes. The difference is important because The Babadook (2014) is devised to be both, and each genre leads to very different interpretations of what we see.

Its a straightforward story about a single mother Amelia whose husband died on the way to the hospital when her son Samuel was born. Amelia is finding it increasingly hard to raise Sam and even his cousins do not want to be near him on his seventh birthday. He believes that a scary Dr Seuss-type character called the Babadook creeps out of the storybook that his mother reads to him at night. This is where the twin film genres diverge. The para-normal happenings can be seen as classic horror, with no logical explanation necessary, just a complete suspension of disbelief. On the other hand, we may be seeing a classic case study in delayed bereavement psychosis, and everything we see is happening only in Amelia’s mind.

The anxiety-inducing lighting and camerawork carry the atmospherics of the story, but the acting performance of Essie Davis and Noah Wiseman are simply outstanding. Essie transitions between a struggling but likeable mother to a woman well beyond the brink of utter despair to complete madness. For his age, Noah shows an extraordinary gift for acting and those huge innocent eyes only accentuate the terror we see. Both actors have the critical element of plausibility that sustains the gradually escalating tension throughout the film. If you are a fan of either fear genre, this is one of the best in the current crop.