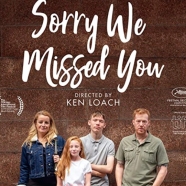 The 2008 Global Financial Crisis wreaked havoc everywhere, and now Covid-19 will reshape economies for years to come. It is in this broader context that the British film Sorry We Missed You (2019) offers a gritty and prescient warning about an industrial revolution that is silently creating new classes of winners and losers. It’s called the Gig Economy.

Set in post-GFC Newcastle, we meet the close working-class family of Ricky (Kris Hitchen), his wife Abbey (Debbie Honeywood), and teenagers Seb (Rhys Stone) and Liza (Katie Proctor). Ricky is a labourer who is proud of never having taken the dole and dreams of one day running his own business. An offer too good to refuse suddenly appears: buy a courier van and become your own boss. To raise money, he sells the family’s only asset, a car Liza uses for making piece-rate visits to care for elderly people in their homes.

Ricky soon finds himself in a prison-like virtual workplace where his every move is app-tracked and every delivery delay heavily penalised. Abbey’s working day lengthens as she struggles to make home visits by bus; iPhone parenting leaves the kids abandoned, and their behavioural problems worsen dramatically. Ricky is buckling under a frantic workload, made worse by a supervisor who couldn’t care less if people are driven to despair. Every late delivery incurs losses, and mounting fines and financial debt becomes a one-way street.

Realistically filmed without cinematic or acting embellishments, the roles of Ricky and Abbey are not cast to be particularly likeable or with any depth of character. Rather, they are avatars for countless anonymous victims of economic change: hard-working, good people who want to live a decent life. Through no fault of their own, people like them are fuelling the ‘new normal economy’ that is tightening its chokehold, squeezing humanity out of society.

As he did in I, Daniel Blake (2016), director Ken Loach speaks with a lucid and sombre voice in portraying the ugly side of modern capitalism. The escalating psychological pressure that is incrementally layered across this miserable narrative is palpable. It is not a joyful viewing experience, but it does offer an insightful glimpse into a future that should sound alarm everywhere.