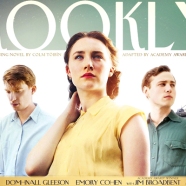 The film Brooklyn (2015) will resonate with viewers who have experienced the magnetic pull of opposing cultures or have been torn between small town familiar and the big unknown. Struggle and hardship are typical for those who leave homelands in search of better lives and tales of the migrant’s journey universally are about physical and emotional dispossession. Such tales are especially touching when told through innocent young eyes and the love triangle is a well-worn cinematic device to symbolise the pain of irreconcilable loyalties.

This film is a high-fidelity portrayal of the excitement and fear of Eilis, a young Irish rose drawn to thorny Brooklyn and the American dream. It is a quest of necessity as high unemployment and political instability in 1950s Ireland led to record numbers of young adults migrating to America, many of whom received an anti-Irish welcome that would trap them forever in lower working class lives.  After finding love on both sides of the Atlantic, Eilis must choose between two lives and two worlds. It is a beautifully photographed and finely acted historical drama adapted from a novel of the same name. The striking contrast of vibrant Irish hues splashed across the greyness of urban Brooklyn reflects the Irish exuberance that added so much cultural colour to the American palette. The storyline is linear and uncomplicated so the full emotional impact of the film must come entirely from acting and Saoirse Ronan delivers in full. She is expressively understated in the role of Eilis as she rides the emotional roller coaster between beloved Ireland and the promises of the new world. Eilis’s two suitors represent two charmingly different cultural versions of masculinity and are strong support actors for Ronan’s outstanding performance.

One of the film’s strengths is also a weakness as all migrant stories are about homesickness, isolation, struggle and young love, hence there is a certain element of narrative predictability. Although often melodramatic as all love stories are, the film is a collection of smaller moments rather than big events. If it makes you teary, as it did me, then you’ll walk out feeling touched by fine storytelling, excellent acting and a well produced period drama.