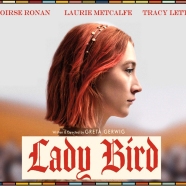 There are many ways to tell a coming-of-age story, but all of them have similar moments of joyful and painful transformation from childhood to adulthood. While clichés are inevitable, the bitter-sweet dramedy Lady Bird (2017) offers a more nuanced portrait of angst-ridden transition to maturity. It stands out from the pack for the beautiful way it frames the story inside the universal love-hate mother-daughter relationship.

Like most teenage-girl films, this one feels like a prolonged melodrama because that is what it is. In a typical act of rebellion, 17-year old Christine (Saoirse Ronan) re-names herself “Lady Bird”. The inverted commas are for anyone who doubts her authorship or right to call herself whatever she chooses. Her depressed but genial father Larry (Tracy Letts) has not been able to find work and her mother Marion (Laurie Metcalf) works double shifts to keep the family afloat. “Lady Bird’s” Catholic upbringing in Sacramento is increasingly claustrophobic and her one dream is to get into an east-coast college that has “real culture” despite her grades and family finances. In the middle of this stock-standard middle-American family, the quirky brat “Lady Bird” battles her tough-love mother while juggling regular problems about friends, romance, and school….like any other teenager.

In the absence of an original narrative there is an abundance of great character acting, genuinely funny moments and a finely paced script. The film’s heartbeat pulsates in the unbreakable cord between mother and daughter. When it finally loosens, as it must, “Lady Bird” reverts to Christine and metaphorically turns into a butterfly. Saoirse Ronan is wonderful in this role, although at 23 years of age her adulthood sneaks through the 17-year old girl she is meant to be. Her facial expressions eloquently convey the crushing moments that mark the transition from girl to woman: like her first lover telling her that “you are going to have so much un-special sex in your life”, or her priest’s warning that “we never escape our past” when she is desperate to do so. Ronan’s performance relies on reciprocation and Laurie Metcalf is cast to perfection as her maternal foil. The pair switch from brawling cats to best friends in a single blink without loss of authenticity.

The joy of this film lies in its unembellished realism: there are no big belly laughs or comedic skits, just many little things that make you smile. “Lady Bird” is a heart-achingly ordinary, funny and smart girl from the “wrong side of the tracks”. Some viewers will recognise parts of themselves, others will enjoy the film through the lens of nostalgia or catharsis. For most, Lady Bird offers a mirror of the emotional, physical, sexual and transcendent moments that shapes our journey into adulthood.