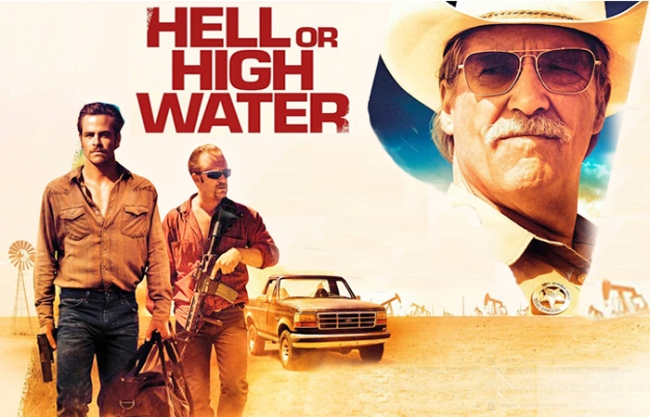 Don’t be fooled by the cowboy hats as Hell or High Water (2016) is much more than just another western bank-robber adventure. It belongs with films like Money Monster (2016) and 99 Homes (2015) that are loaded with post-GFC themes, all scorching the underbelly of American capitalism. As a hybrid genre, it cuts across several cinematic boundaries to produce an action-packed semi-comedic yet darkly probing look at a society still reeling in the wake of the 2008 world financial meltdown.

The story hinges on the pursuits of two brothers who rob several banks in the wild west of Texas. Toby (Chris Pine) is the likeable one who wants to save his farm from mortgage foreclosure by a bank that still feeds off the sub-prime loan fiasco. Recently out of prison and far from likeable, his brother Tanner (Ben Foster) is erratic after years of pent-up violence. As opposites they represent the yin and yang of capitalism, set against dystopian landscapes of rusting cars, abandoned houses and poverty, beyond which are desert-scapes still beautiful despite human presence. Their fox-smart nemesis is a Texas Ranger called Marcus (Jeff Bridges) who is about to retire and wants to snare one more before handing in his badge.

In many ways, the details of the robbing and running play second fiddle to the bigger picture that is painted in this film. Seeing the two modern-day Robin Hoods exacting revenge on the system that causes so much injustice and pain is an innately satisfying spectacle. Except for Tanner’s violent tendencies, their crimes are victimless once we accept the premise that banks are evil. Several other narrative strands weave the larger story about today’s wild west. Marcus has a part-Comanche deputy called Alberto (Gil Birmingham) whom he mercilessly teases on racial lines in a nasty throwback to white supremacy. It is hard to miss the bitter irony of former Indian land stolen by cowboys that is now stolen by banks, a twist that leads us inexorably to side with the bank-robbing brothers.

Outstanding cinematography and fine acting performances are the film’s great strengths. Portrait-like framing shifts seamlessly from wide panoptic views to close-ups of craggy age-lines and worried glances, all in a colour palette that glows like desert skies. The storyline has varied pacing that captures both the slow clock of desert living and the danger of life on the run. The principal actors are cast perfectly and bring authenticity and nuance to their roles. This is a visually engaging and thematically rich film with an unexpectedly enigmatic ending. It will undoubtedly find a place among the nominations for this year’s best.