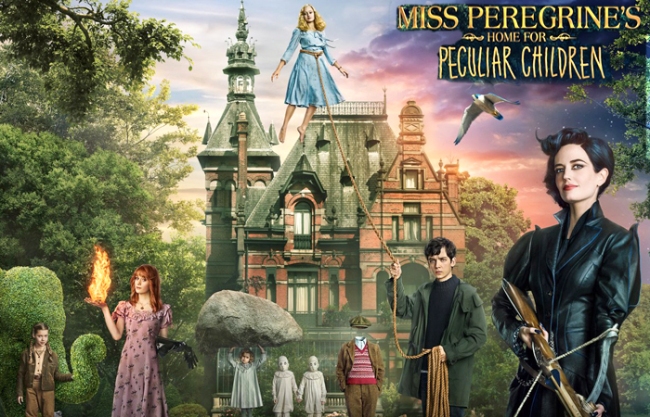 Fantasy films work through a kind of free association logic where you join the metaphorical dots to create the story you want to see. They do not follow standard cinematic logic, like causation or narrative coherence, and younger and older minds can take away vastly different stories from the same film. This is fortunate in the case of Miss Peregrines School for Peculiar Children (2016), as audiences of all ages can enjoy a wonderful, magical and intriguing world of fantasy without the burden of actually seeing the dark and heavy hand of history that overarches this film.

The story of Miss Peregrines turns on a life-changing event for young Jake (Asa Butterfield) whose beloved grandfather dies in strange circumstances. Jake was raised on stories about an orphanage full of fantastically peculiar children and he embarks on an odyssey to find the truth. Guided by his grandfather’s dying words, he finds a gateway to another time and place full of children with special gifts under the guardianship of Miss Peregrine. The orphanage appeared to be demolished by World War II bombers but its headmistress Miss Peregrine reversed the passage of time an instant before a Swastika-labelled bomb struck. An endlessly repeating time loop keeps them frozen in history but not safe from the forces of darkness that would destroy the peculiars.

Jake discovers he has a special power that is needed to protect the peculiars: he can see enemies that are invisible to others. Torn between choosing past and future worlds, Jake navigates a journey that is rich in sub-plots and incidents, all woven together with shifting timeframes, Gothic mystery and deadly intrigue. The youthful cast give solid performances, although the acting benchmark for fantasy films is not high. The hyper-realistic 3D rendition is colourfully immersive and the action is fast-paced and engaging. Even the most serious-minded adults can enjoy this film.

Like in all creative art-forms, what you see depends on where you look. With the passage of time, history storytellers can no longer use conventional tropes to preserve the memories of humanity’s dark past, especially for younger generations for whom some parts of history are simply beyond belief. The deeper current running through this film is about real atrocities committed upon real people in order to preserve the genetic purity of a master race. The ‘time loop’ and the use of vintage photographs are figurative devices pleading for these memories to be kept alive, and the lovable peculiar children are a means for engaging young audiences to cherish and not reject others just because they appear different.