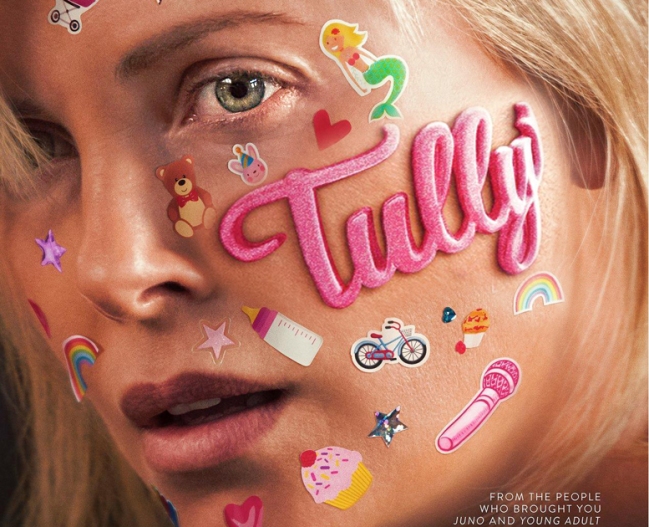 In off-Oscar-season times, originality stands out and one of the most original you’ll see this year is Tully (2018).Sure, it is full of recognisable scenes, moments, and messages that not even extraordinary acting can hide. But it is the way the narrative has been framed and the unexpected climactic reveal that leaves this film lingering in your memory long after its viewing.

We enter the story through the cliché-portal of a stressed-out and hugely pregnant Marlo (Charlize Theron) who is struggling to be a good mother for her eight-year old daughter and six-year old autism-spectrum son. Her useless husband Drew (Ron Livingston) expects dinner on the table each night and then retreats to his video games. Despite friend’s promising that “it gets easier each time”, the arrival of the unplanned third child becomes the tipping point for her downward spiral into a world of sleepless domestic chaos. She initially declines her wealthy brother-in-law’s offer of a night nanny but on a day of multiple disasters she snaps and calls for help. Young and attractive Tullly (Mackenzie Davis) is soon on her doorstep and Marlo’s world changes immediately. Tully delivers the baby for feeding, the house is clean, cakes are baked, and Marlo has a new best friend. Motherhood is a calm place until some weeks later when Tully announces she is leaving and events take unexpected turns that land Marlo in hospital.

At one level the story feels familiar, maybe slightly fanciful, especially if you are a parent. The idea that you can be in a pit of despair and dial-in a home-delivered perfect solution is deliciously appealing. Some viewers will experience the film purely at a literal level that is comically foreshadowed in the trailer, especially the container of freshly pumped mother’s milk tipping over and the cell-phone that is dropped on baby’s head. Other viewers will spot the early clues but not realise until the climactic revelation that this film is a serious case study in post-natal psychosis.

Combining magical realism, comedic drama, and a little understood mental condition into an entertaining movie is brave and original cinema. Releasing it in time for Mother’s Day is almost mischievously deceptive. Charlize Theron gives an award-worthy performance that is a long way from comedy or fantasy: her portrait of a mother on and beyond the edge of sanity is grounded in the gritty daily grind of being a parent.

There needs to be more films like Tully. While it is entertaining and even formative for some audiences to swoon over super-heroines and other fantasy females, those celluloid icons shed little light on how to live in the real world. Despite the controversy stirred up among motherhood and psychiatric fraternities, Tullycan help improve understanding of post-natal mental health.