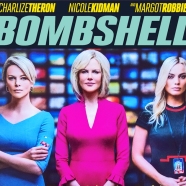 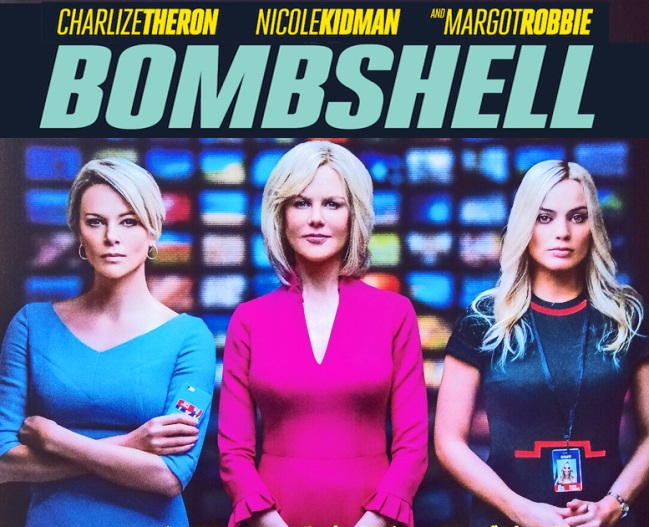 There is more to Bombshell (2019) than first meets the eye. The film’s message includes and goes beyond the ‘Me Too’ movement, targeting toxic masculinity and right-wing media’s fawning support for the current American presidency.

Being based on true events requires a lot of detail to be presented early to create meaningful context, but facts alone do not always make good cinema. The real-life story centres on two high-profile female victims of abuse by a powerful media mogul; an invented third victim is an avatar for all young women who find themselves at the mercy of powerful sexual predators.

While the story has several sub-plots, twists, and turns, the narrative arc is linear and well summarised in the official trailer. Top Fox newscasters Megyn Kelly (Charlize Theron) and Gretchen Carlson (Nicole Kidman) are sexually abused by Fox News boss Roger Ailes (John Lithgow). Ailes has created a highly profitable right-wing news organisation, linked to powerful conservative players in the 2016 Presidential elections. Newcomer Kayla Pospisil (Margot Robbie) enters a toxic environment that is ultra-sexist and intolerant of progressive issues: if she wants success, she must choose between self-dignity or becoming an abuse victim.

The historical facts need no embellishment, but Bombshell has chosen explosive over exposition. Its multiple plotlines mean that each victim lacks depth of characterisation, while predictable cliches are deployed to give the film cohesion. The three heroines are visually homogenised to the point where each appears as a slightly different version of the same blond ‘Barbie Doll’. Although sympathetic to the victims and critical towards the morally corrupt Ailes, the film takes only a light swipe at the influence of the Murdoch-Fox news factory in servicing right-wing political values.

Despite being lightweight where a strong voice is needed, Bombshell is a worthwhile contribution to important social and political debate. The role of mega-wealth in national elections, as represented by Murdoch and Trump, is brushed to the edge of frame, and the modern phenomenon of manipulating voter opinion through selective news reporting is left for another day.

Thanks to its talented female ensemble, Bombshell is effective in showing the painful moral dilemma faced by career women who must deal with toxic males; and it’s hard to imagine anyone doing a more chilling portrait of a menacing creep than John Lithgow. Some might say the film’s tendency to dramatise could tarnish successful women with innuendo about how they became successful. On balance however, the most critical conclusion one could make about this engaging film concerns what has not been included rather than what is there.