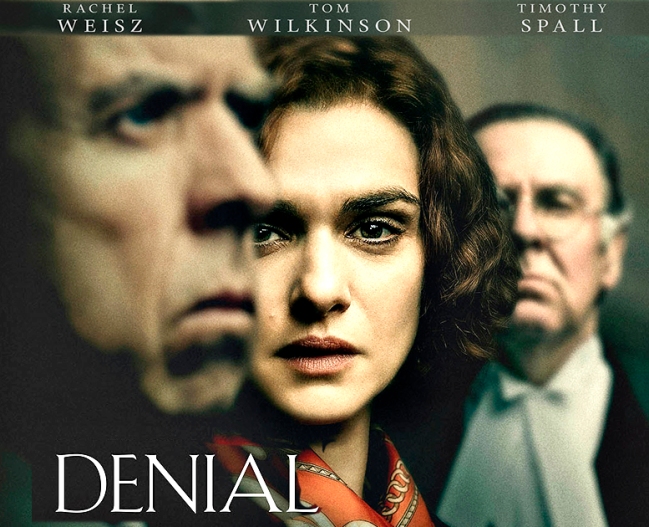 The nature of truth and the power to manipulate it have long been contentious themes in history and cinema. The outstanding film Denial (2016) resonates loudly in today’s post-truth world where power is often used to create alternate realities. It is a film that portrays denialism as a dangerous and perverse form of moral corruption, something that may be contained but can never be eliminated.

The story is based on the celebrated 1996 legal case fought between eminent academic Deborah Lipstadt, an American professor of Holocaust Studies, and David Irving, a historian of Nazi Germany. A book published by Lipstadt (Rachael Weisz) accuses Irving (Timothy Spall) of being a Holocaust denier and falsifier of history, and Irving sues for defamation. In the British justice system, the burden of proof is on the accused so Lipstadt must prove that the Holocaust did happen to establish that Irving is a liar. She engages a top legal team led by senior barrister Richard Rampton (Tom Wilkinson) who insists that neither Lipstadt or Holocaust survivors should present testimony against Irving because of his history of promoting himself by humiliating victims. Lipstadt and her lawyers visit Auchwitz to gather evidence of the existence of gas chambers but the bulk of the story is played out on the legal battlefield at court.

Modern audiences are desensitised to the atrocities of war. It is glorified in movies and video games and feeds the entertainment and amusement industry. Today’s filmmakers struggle to find ways of remembering the Holocaust without alienating viewers. The extraordinary Son of Saul (2016) takes audiences right into the flames, whereas Denial (2016) explores the moral issues in a courtroom. In reality, this was a high-stakes legal battle that could have potentially delegitimised the entire history of the Holocaust. It is an outstanding achievement that this film can capture the tension and the burden of moral responsibility carried by the Lipstadt legal team.

The casting and characterisation in this film are brilliant. Rachael Weisz’s American brashness presents a stark cultural contrast with the conservative traditions of British justice. She convincingly portrays a principled academic and scholar of truth, showing restrained emotion beneath her loathing for Irving’s anti-Semitism. Tom Wilkinson gives a masterful portrait of wisdom and conviction, while Timothy Spall plays Irving with subdued Satanic malice. The other support cast make up a strong ensemble. The narrative unfolds at a sweeping pace and the script is both intelligent and instructive in the legal nuance of courtroom manoeuvers. The footage of Auchwitz is emotionally harrowing and the film treats its subject matter with utmost reverence.

If you want light entertainment, do not see this film. It is for audiences prepared to confront the dark side of humanity as well as those interested in the intricacies and triumphs of the British legal system. But more than that, it’s an essay on the nature of truth in history and it exposes the moral abhorrence of those who manipulate facts to suit their prejudices. It is also a warning that manipulators of truth will always be among us.