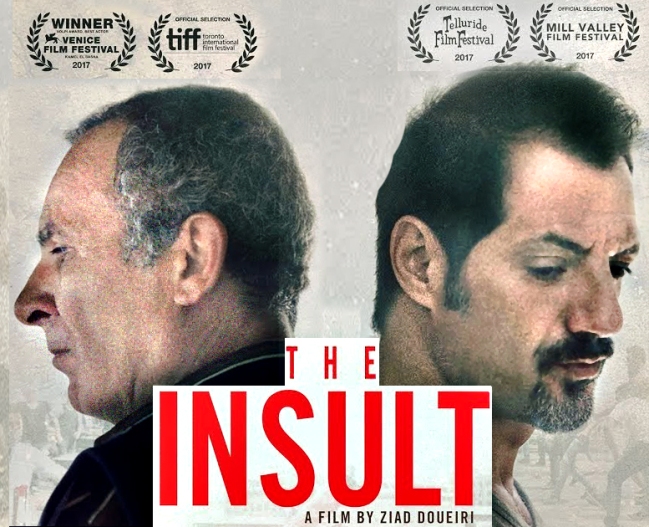 It is never easy to review a film against the grain. With critical acclaim and awards piling up,The Insult (2017)is a well-timed film in a global context of disharmony over refugees and immigration. While if offers many insights into the nature of human conflict, it is also heavy-handed with its lessons on sectarian intolerance. Being an important film is not the same as being a great one.

The story trajectory is simple. Tony (Adel Karam) is a Lebanese Christian who lives with his pregnant wife in a small flat in Beirut. Working on the street below, Palestinian refugee Yasser (Kamel El Basha) is splashed by an illegal drainpipe from Tony’s flat. An argument ensues, Yasser uses a coarse expletive, and an apology is sought. The company employing Yasser tries to negotiate an apology, but when they meet Tony declares “I wish Ariel Sharon had wiped you all out” and Yasser punches him. Soon they are in court, and media attention transforms the personal insult into an example of racial conflict between the majority Lebanese and the minority Palestinians.

This is really two different stories intertwined as one. Whilever the focus is on the actual insult and its attempted repair, the film has a strong forward narrative with many insights into the spiralling nature of human conflict. However, in the second half, the film leaps with disproportionately large steps into the endless conflict since the 1948 Arab-Israeli war and hate speeches by various leaders over several decades. The film presumes an audience that has some grounding in the historical complexities of the region. If they do not, it may be challenging to identify the “good guy” and the “bad buy” especially in light of their respective political baggage. The task of following the film is made more difficult by the speed with which the sub-titles must be read to keep pace with the anger-laced dialogue.

Despite these issues, The Insultleaves a strong impression. Authentic actors, a dramatic style of cinematography, and a shooting location that has natural ownership of the story, all combine to provoke thought about its subject matter. Although hardly entertainment, it is a voice for a cause even though many Westerners will be uncertain what that cause might be.

Film has always been an important carrier of socially significant messages. Where this occurs within a narrative framework it adds to a film’s achievement. But when it occurs outside that frame it enters a didactic space which exploits the narrative to deliver polemic. By entering this domain, The Insultbecomes a lecture in sectarian politics and history. With a more subtle directorial touch, the film could have shown it’s message instead of shouting it.