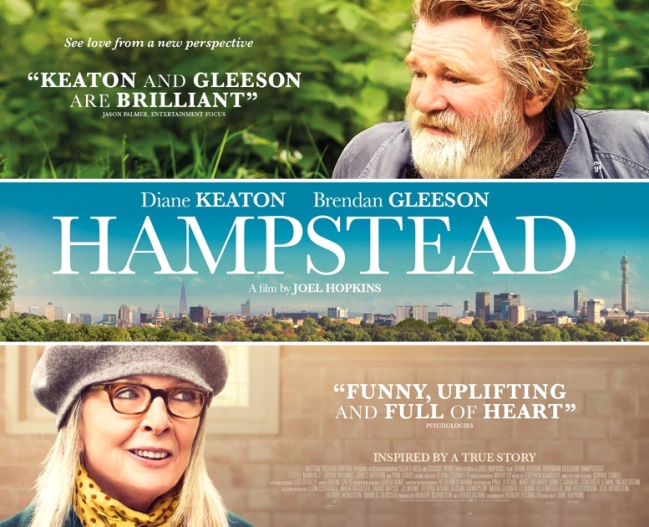 Importing a Hollywood veteran into a quintessentially English romantic comedy can sometimes be magic, sometimes not. Hampstead (2017) might have been a great British romantic comedy but instead it must work with an inauthentic American personality who limits the film’s impact. Fortunately, brilliant cinematography rescues the film enough to produce a visually delicious but lightweight story of late-life romance between a lady and a tramp.

Based on a true story, Donald Horner (Brendan Gleeson) has been a squatter on London’s Hampstead Heath for 17 years. He is a surly off-the-grid loner who avoids all trappings of modern life in a quaint shanty shack built from other people’s rubbish. Within a binocular’s view from across the road, American widow Emily Walters (Diane Keaton) spies him bathing in the pond and out of curiosity soon invents an excuse to meet him. Property developers have targeted the land, and Donald must defend himself from an eviction notice. He becomes a cause celebre with do-gooders and naysayers petitioning for and against his squatter’s rights while he and Emily get together despite pushback from her posh Pommy friends. This predictable narrative of tramp versus society offers modest delights but few surprises.

There are three noteworthy parts to this uneven film: the cinematography and the two co-stars. The first is simply wonderful: Hampstead village and the Heath are lovingly filmed and the charming shanty shack looks like something out of a fairy tale. Every time Donald or Emily walk down the narrow track into the woods it becomes an act of escapism from urban living and entry into a floral wonderland. Brendan Gleeson is cast to perfection as a girthsome giant with craggy features and expressive eyes. His Irish accent complements the natural beauty of the Heath to which he convincingly belongs. And then there is Diane Keaton. What made her famous forty years ago in Woody Allen films do not translate easily to this contemporary British rom-com. The camera has tried too hard and its efforts are just too obvious: repeat use of backlit shots, glowing soft-focus, cutesy beret hat and Annie Hall smiles make it hard to engage with her character as a real person. In contrast to Donald’s melodic Irish-ness, Emily’s timing and tone are often grating. For example, when Donald’s home of 17 years is cruelly trashed in a turning point moment, Emily’s breezy response might work in New York but here is totally disengaged from what has just happened.

Donald’s story is based on a real character and a real fight between a homeless eccentric and the imperatives of capitalism so there is a serious side to Hampstead. But this lightweight rom-com is unlikely to raise consciousness of what is means to be homeless. The lukewarm chemistry between the senior lovebirds will excite few and the sleep-inducing musical score even less. Whether casting Keaton can add American baby boomer audiences to an essentially home-grown British story remains to be seen. Filmmakers sometimes need reminding that older viewers can handle more challenge than one-dimensional films like Paris Can Wait (2017) and Hampstead (2017).