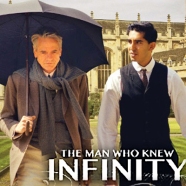 Without bio-pics so much history would go unnoticed. Movies like The Theory of Everything (2015) and The Imitation Game (2015) celebrate icons of knowledge and elevate brains to equal footing with sporting and other heroes. The Man Who Knew Infinity (2016) is another such story that needs to be told. The field of theoretical mathematics is not one that will excite many audiences and this film does little to convince us of its charms. Making sense of what was achieved in this field is an insurmountable challenge, so instead the film tells a tale of two cultures that collide in the hallowed halls of Cambridge in the early 1900s.

Gifted self-taught mathematician Srinivasa Ramanujan (Bev Patel) was born into poverty in India and had no formal education. He absorbed mathematics intuitively and believed that ”a mathematical equation had no meaning unless it expressed a thought of God”. Having learnt all he could in India he connects with Professor GH Hardy (Jeremy Irons) of Cambridge, one of the leading mathematicians of the era and an avowed atheist. The rest of the story is a beautifully told narrative cliché of a dark skinned genius and his obstacle-course odyssey from poverty to a Fellow of Cambridge. Srinivasa’s belief in God’s will as the source of his gift clashed with musty academic traditions that required detailed proofs behind every mathematical breakthrough which initially led many academics to denounce him as a fraud. He found class, racial, religious and cultural barriers everywhere and Hardy’s patronage forced Srinivasa to work against what came naturally. Having left a wife behind in his beloved India, he was emotionally isolated and his health suffered.

Nobody does historical period films like the British and this one has impressively high production values for a novice director and modest budget. It portrays the mood and style of the era with authenticity, both in Madras and England. The filming favours Srinivasa’s viewpoint to show what it must have been like for a person of his humble origins to walk the grounds of Cambridge and encounter its academic aristocracy. The greatest strength of the story undoubtedly comes from its acting principals Jeremy Irons and Bev Patel. They play opposites in every way except in their love of pure maths, and Hardy’s patronage ensured that Srinivasa’s legacy continues into the modern era. This is a great story of a hitherto little-known Olympian of knowledge that will thrust his name into today’s mainstream film culture for some time to come.