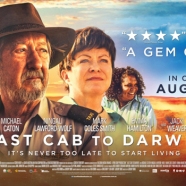 A widely recognised characteristic of Australian film is our capacity to find humour in almost any subject. When people from other places try to describe our national character, they use words like larrikin, irreverent, or iconoclastic, meaning we like to laugh at ourselves and the sacred cows in our patch. So how do you laugh at dying, let alone make an Aussie comedy out of a road film that has euthanasia as its destination?

Aussie icons Michael Caton and Jackie Weaver provide the larrikin mix of gravitas and humour needed to make a deadly serious issue bearable as we share the journey and the end-of-life issues facing the terminally ill cab driver Rex.  He has never been outside Broken Hill and must drive 3,000 kms to Darwin to be the first person who is legally assisted to die by Weaver who plays a feminine version of Dr Death (as euthanasia advocate Philip Nitschke was called). Like in all road films, he crosses iconic landscapes and encounters bad things. He also meets some beautiful characters like the Pommie backpacker Julie who becomes his nurse, a mischievous Aboriginal Peter Pan-type called Tilly, and Polly, the Aboriginal neighbour and secret lover he left behind but calls regularly. The backstory of our nation’s inept relationship with the traditional owners of our land frames much of Rex’s journey, just as it continues to frame our evolving national identity.

While it is an entertaining Aussie yarn, that’s not its only purpose. Superb acting by Caton in particular brings you up close and very personal to the emotional and practical challenges of picking a time and place to die with dignity. The film can get heavy-handed in the way it loads political and moral messages into the story; for example, when Tilly yells at Rex “You think its brave to let someone else do your dying for you?” we are confronted with different ways of looking at assisted dying. Rex makes it to Darwin only to find medical and legal confusion, so things do not turn out as expected. For some, it’s a distracting edit to have Rex back home in minutes when it took half the film to get there, but perhaps this reflects the truncation of time when the time has come. Be warned: this is a film that can mess with your head about the complex issue of assisted dying, but it’s an Aussie gem well worth the effort.