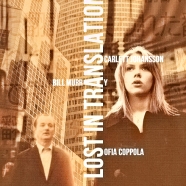 Like with all films, your reactions to Lost in Translation (2010) will depend on how your own life journey is unfolding.The acting is so nuanced and expressive, that we the viewers can simultaneously be the boy and the girl in this poignant love story that is framed entirely by what did not happen and the haunting possibilities that were left unexplored.

Spanning a fatherly age barrier, two people find in each other an almost palpable loneliness made more so by being isolated from the often strange cultural customs of frenetic Tokyo. Both married to others, she is beautiful (as Scarlett Johansson is) and he is old-school funny (in a Bill Murray way). Through chance encounter and to relieve boredom, they go to the edge of flirting with the possibility of physical connection but neither acknowledges that game and both stay safe within the rules of a passing platonic friendship.

This film is an exquisite tease, not between the two stars, but between the film and the viewer. We sense possibilities that might transcend age and other lines of defence if only we let go. It also shows how life can randomly and briefly offer the gift of hope which dissolves, like a puff of smoke, as we turn away. This is a wonderfully crafted film, but unsettling in its ability to leave you yearning.